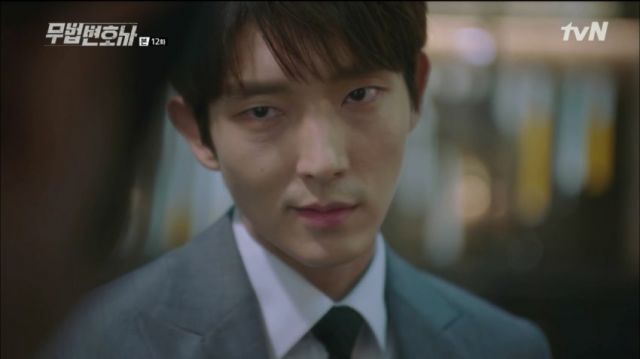 So Hyeon-joo is forcing Sang-pil not to tell Jae-i about the full situation. While Hyeon-joo's motherly concern is understandable, the woman could really use a comparable sense of self-preservation. For that matter, Sang-pil also should have shown more interest in Hyeon-joo's welfare for Jae-i's sake. Even if Hyeon-joo was going to continue to go undercover, imagine the drama that could have been avoided if Sang-pil had insisted on giving her a GPS device.

Yes yes, strictly speaking we watch dramas for the, well, drama. But "Lawless Lawyer" is the kind of story that's at its best when the heroes come up with impressive plans of their own to counter the already impressive plans of the antagonists, only to discover that the antagonists have had an even more impressive secret plan all along. And of course, you have to love those moments where the plan is so subtle there isn't even a realistic counter-move.

Take Sang-pil's investigation of Moon-sook's behavior at the press conference. Is he right? Well, maybe. But consider this. Who are the best leaders, the ones who run away at the first sign of trouble, or the ones who stand their ground? Whatever Moon-sook's long-term motivation may be, and whatever ridiculous excuses she or her surrogates offer to explain away nasty evidence, she still looks like a leader. That's where her real strength lies- not in the publicity gimmicks.

The way Moon-sook and Oh-joo obsess over bad press remains a major point of high comedy, especially since Sang-pil clearly does not care what anyone thinks of him. Usually this dynamic plays the other way around. It's the heroes who have their hands tied by the fear of appearing unethical, while the villains openly pull all sorts of over-the-top evil and are never even so much as slowed down. Sang-pil's warehouse gambit works entirely because it's so plausible. Moon-sook and Oh-joo talk so much about what a bad dude Sang-pil is that even their minions believe it.

Jae-i still struggles to be useful, as usual. In what easily qualifies as this episode's goofiest moment, Jae-i's shrimp allergy, of all things, becomes a major plot point. There were so many reasons for Jae-i to be suspicious of Hyeon-joo, and that's the one that puts her over the edge? Although I guess I should be thankful that Jae-i is at least in the loop now. Maybe she can more effectively collaborate with the rest of the team now.