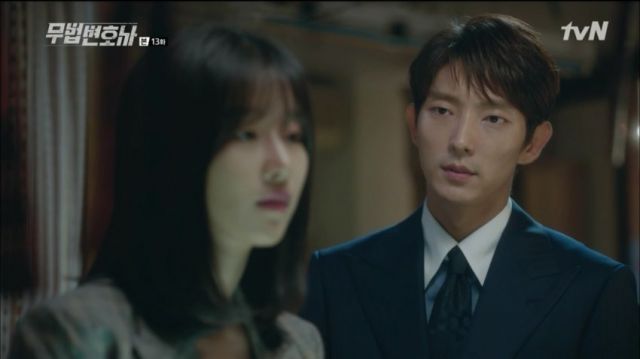 Now that Hyeon-joo is captured, Jae-i and Sang-pil have to race to save her. Well, not really. There's not as much urgency to Hyeon-joo's situation as we would expect because Moon-sook only wants Hyeon-joo liquidated under extremely specific circumstances. That's because Moon-sook actually doesn't really care about Hyeon-joo that much and never did. The Hyeon-joo situation is just an excuse to shake up Moon-sook's existing personnel.

This is all quite a bit more dramatic than it sounds, since we now know that Moon-sook's plan this entire time has just been to reorganize her criminal empire in a way that makes it seem like she's cleaning house. This explains basically everything about Moon-sook's weirdly aloof response to the threat posed by Sang-pil. Moon-sook doesn't suffer from hubris. That was just the front she put on to keep Sang-pil and Jae-i from getting suspicious.

One problem remains. If Moon-sook is the true source of all the information Sang-pil has been using to bring her organization down, that must mean none of the information Sang-pil has would actually be useful when it comes to attacking Moon-sook directly. Moon-sook being a legal expert, she would know the distinction. That means it's (finally) up to Jae-i to prove her worth to the team by bringing something useful to the table that wasn't in Moon-sook's calculations. Jae-i's rift with Moon-sook, after all, was not preplanned.

Unfortunately Jae-i has been a less than useful character up until now. Her main actions this episode just involve getting mad at people because her long lost mom has been kidnapped. Oh-joo ends up showing a lot more dramaic range, because the man has finally realized that Moon-sook is not his partner, and that he has no idea what her actual plan is. Worse, Oh-joo can't realistically team up with Sang-pil and Jae-i because he's still a crook to them. I really like the moments where Oh-joo is clearly cracking, being louder than he needs to be because for the first time the man is sincerely very frustrated.

By far the strongest part of "Lawless Lawyer" is how its villains are compelling, engaging characters with complex motivations who nonetheless remain entirely unsympathetic. Moon-sook is, in the end, just a sneaky bully, and Oh-joo is starting to realize that the sense of honor which he uses to rationalize his actions is just an imaginary construct. I just wish the heroes in "Lawless Lawyer" were this well-rounded. They're boring archetypes by comparison.