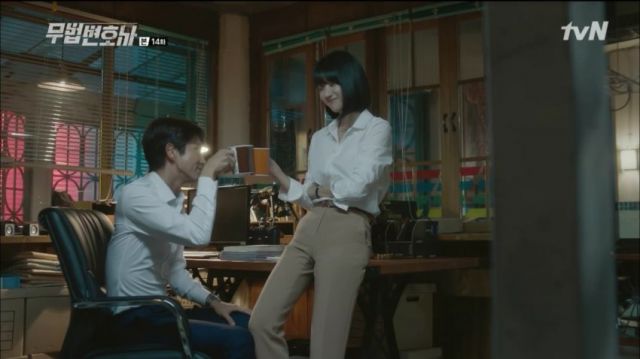 I like how even though we understand how Moon-sook's scam works, Soon-ja is still completely oblivious. As tempting as it is to write Soon-ja off as just being really dumb for failing to realize that Moon-sook set her up, it's worth noting that all of Moon-sook's cronies have been rationalizing Moon-sook's failure to act the same way. It's just that back then we (and they) were inclined to see Sang-pil as the real threat, such that Moon-sook's actions could be justified under the auspice of self-preservation.

The main wrench that's thrown into this plan is that Sang-pil makes no effort to beat down on Soon-ja. To the contrary, while Moon-sook has all manner of excuses for why she can't help, Sang-pil pops up straightaway and offers to make Soon-ja a deal. Of course, Soon-ja doesn't actually trust Sang-pil to do anything, but the question is still raised. Given that Soon-ja's true motivation is to further her daughter's career, how loyal is she to Moon-sook really?

I do wish the threat hanging over Soon-ja's head was a little more credible. While we may know that Hyeon-joo is actually alive, the lack of evidence that Hyeon-joo is dead makes the prosecution's entire case dubious to begin with. Observe that no one even knows who Hyeon-joo really is. She's just referred to as the Thai massage therapist. She may just as well have fled the country. Especially since Soon-ja was trying to kill her.

I'm also disappointed in how, even in the midst of the climax, Jae-i doesn't really add anything to the operation at all. In all fairness Sang-pil is also more of a reactive character than a proactive character. A lot of the time I get the feeling that "Lawless Lawyer" would work a lot better if Sang-pil and Jae-i were supporting cast rather than the leads, with the perspective character being someone who works for Moon-sook slowly coming to realize that Moon-sook is actually evil.

Well, strictly speaking that was Jae-i's character arc in the early episodes. Which is the main problem really. She just hasn't done much since then. Meanwhile, we've got Oh-joo furiously slurping ramen and watching television coming up with his own largely undescribed scenes. Even Yeon-hee, a very minor character by all accounts, is starting to realize just how pernicious and unhealthy the relationship between her mother and Moon-sook really is. Other minor characters similarly are interesting chiefly because they grapple with moral ambiguity.