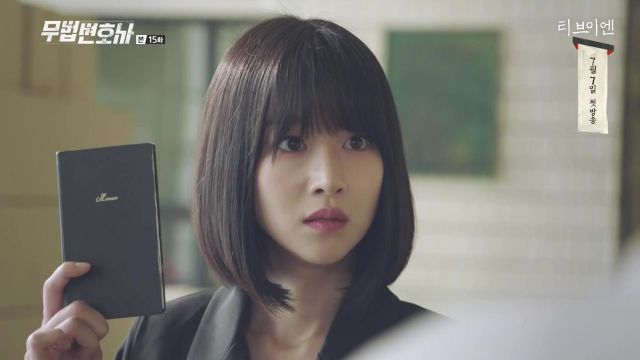 First the stand-off regarding Jae-i's kidnapping has to be resolved. I have to admit, I was rather disappointed to find that after all that scheming this was the best plan Oh-joo could come up with. His only back-up is this one guy who's not very competent and appears to be a named character but I can't remember him ever doing anything important prior to this episode. Oh-joo's actions in the closing scenes come off as even more perplexing.

I did like Oh-joo's emotional ambiguity in his confrontation with Sang-pil. On one end, now that Oh-joo has been shown the notebook and told where it came from, his options are limited. As Sang-pil puts it, Oh-joo can either go down alone or take down Moon-sook with him. But on the other end, Oh-joo hates being told what to do. So logically, Oh-joo attempts to deal with this conflict by engaging Sang-pil in a pointless fistfight. This makes sense from Oh-joo's gangster point of view.

Similarly, it also makes sense for Moon-sook to preside over Soon-ja's trial, obvious conflict of interest notwithstanding, because this is how both Moon-sook and Oh-joo have been buffing up their credibility. They take down other crooks, even when those crooks work for them. Yeon-hee, sadly, is slow to realize this and instead concludes that Moon-sook is actually trying to help Soon-ja. At least Soon-ja is able to shed some of that naivete.

Unfortunately most of this climax is fairly rote. Everything is too obviously telegraphed. Not just in narrative terms, but also in regards to internal continuity. I still really don't get why Sang-pil and Jae-i feel the need to confront Moon-sook and tell her what they're doing all the time. If Moon-sook thought that Sang-pil still believed the book came from an anonymous benefactor, her arrogance would make some sense. Yet somehow she is shocked to discover that Sang-pil has now expanded his information gathering network to rely on other sources.

This would probably bother me a lot less if Sang-pil and Jae-i themselves were a bit more clever. "Lawless Lawyer" still struggles with trying to find anything interesting for Jae-i to do, which is why both Sang-pil and Jae-i are present for the trial when only one of them is particularly necessary. Their interrupted privacy scene, corny though it is, actually proves to be a highlight just because it gives them a chance to act naturalistically for a change.