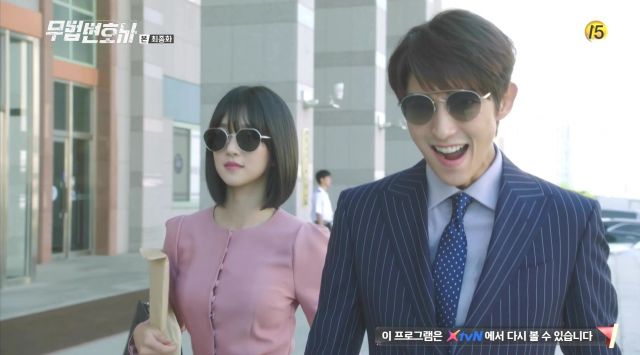 For all the courtroom theatrics the final episode of "Lawless Lawyer" feels oddly anticlimactic. This is fairly unavoidable, though, considering we already know what Sang-pil's ace-in-the-hole is for proving Moon-sook's guilt. I really don't get why "Lawless Lawyer" felt the need to directly tell us that Hyeon-joo was saved right when it happened. I mean sure, her coming in to save the day would still have been fairly predictable, but at least it wouldn't have been one hundred percent obvious.

It doesn't help that nearly the entire runtime here is dedicated to just the trial, with barely any time left over for an epilogue. I especially feel cheated of how we never get to see Hyeon-joo reunite with her long lost husband, and we get a better glimpse of Sang-pil and Jae-i in flashback than we do of their future. Even though Sang-pil has finished off his lifelong obsession by locking Moon-sook up, there's surprisingly little emotional catharsis as the man must find a new purpose in life.

Oh-joo actually has a more convincing character arc here even though half of his scenes are just spent acting like a crazy homeless bum at the top of some random building. That's because Oh-joo is truly, ultimately, psychologically finished. Oh-joo is a pitiful shell of his former shelf, and he knows it. What motivates him to go after Moon-joo in the end is no sense of vengeance, or justice. No, Oh-joo has simply lost all hope.

That's the main part of Moon-sook's scheming that really impressed me- the way she uses hope as a weapon. Soon-ja and Yeon-hee are both willing to go along with Moon-sook's plan because they've talked themselves into thinking there's a way they get out of this with all their hopes and dreams intact. Even having had it explicitly spelled out how all their desires are mutually exclusive, Soon-ja and Yeon-hee struggle to believe anything else because a hopeless future is unfathomable to them.

That's also about the only way I can read Moon-sook walking right into Sang-pil's final trap plausibly. The woman is just that used to winning, that she refuses to so much as hedge her bets. Put that way her fate is actually rather poetic. But I can't give the production team that much credit, since the theme isn't really that well-emphasized. It really is a shame how out of the whole cast it's our two leads who we have to spend the most time with that end up being the most boring characters.