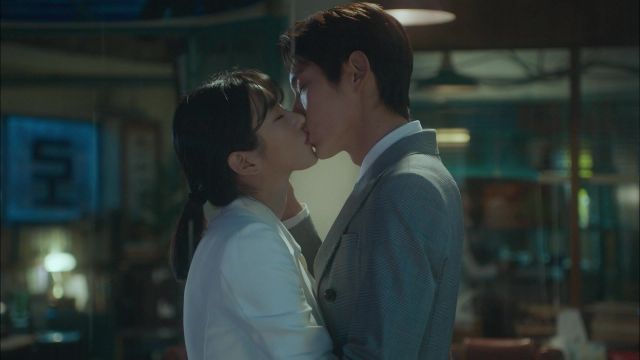 Earlier this week I read criticism about the sudden romance that popped up in "Lawless Lawyer" and thought to myself, was it really bad? Then I watched the drama myself and yeah, it was pretty weird. The first scene we get is Jae-i (played by Seo Ye-ji) confronting Sang-pil (played by Lee Joon-gi) over why there are pictures of her mother (as well as Jae-i herself) on Sang-pil's investigation board. Even when Sang-pil provides a reasonable explanation, it's still fairly creepy how he didn't tell her this sooner.

Oh yeah, Jae-i and Sang-pil are both lawyers. The actual plot of "Lawless Lawyer" is about their effort to take down a crime ring run by the corrupt judge Moon-sook (played by Lee Hye-young-I) and corporate bigshot Oh-joo (played by Choi Min-soo). The situation is especially tense, because even though Moon-sook and Oh-joo know they are under attack, they are still moving ahead with plans to elect Oh-joo into a position of relevant political power.

"Lawless Lawyer" is actually pretty slick as long it's being a legal thriller. Moon-sook and Oh-joo are always a step ahead of Sang-pil and Jae-i because the lawyers are stuck investigating crimes that have already happened while Moon-sook and Oh-joo have moved on to newer ones. Moon-sook is mostly just annoyed at how Sang-pil ends up wrecking an attempted frame-up by the criminal conspiracy in the climax. But Moon-sook is a woman of quiet, psychotic precision. Which is a nice counterpoint to Oh-joo just being an aggressive swindler.

The extended kiss and implied sex scene between Sang-il and Jae-i really does not fit into that very well. Even on an emotonal level those scripting choices interfere with Jae-i's emotional tension when it comes to learning of her mother's role in the conspiracy. Jae-i needs space, and maybe a hug. Anything beyond that comes off as borderline rapey, even when taking the appeal of Lee Joon-gi's giant manly arms into account.

That scene was an awkward tonal choice in a drama that's otherwise a very engaging legal thriller. There's some surprising emotional complexity here from generally archetypal characters. I liked the bit where Jae-i's dad Gi-ho (played by Lee Han-wi) gets suckered into supporting Oh-soo's campaign, because he likes the guy's rude aggressive attitude toward solving problems. What better explanation is there than charisma to explain how people as obviously evil as Moon-sook and Oh-joo came to be so powerful?