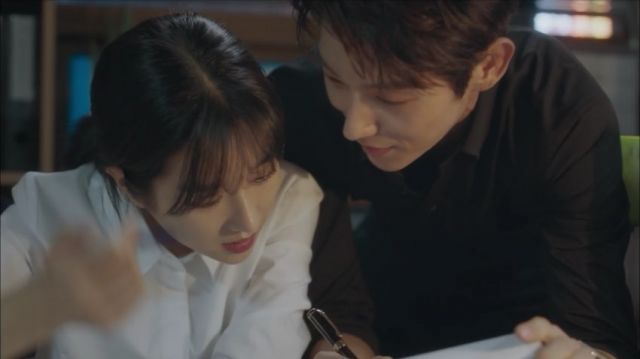 Hyeong-man (played by Lee Dae-yeon) is the hapless corrupt prosecutor who Sang-pil and Jae-i rescued last episode. The only problem is, Hyeong-man didn't really want to be saved in the first place. And his newfound sense of moral clarity is accompanied by an equally strong desire to avoid taking orders from anyone, including Sang-pil and Jae-i. So after he leaves them some critical clues, Hyeong-man is on his own doomed solo attempt to take down Oh-joo single-handedly.

A major reason why Oh-joo is such an effective protagonist is that he radiates confidence even in situations where is badly outmatched or out smarted. The man is a genius bluffer. So seeing him use those skills in the restaurant scene is an oddly fitting parallel to Oh-joo's political campaign, where Oh-joo uses the exact same temperament to burnish his credentials as a candidate. The man is a born leader. I mean sure, he's evil, but at least he gets stuff done, and have you seen the other guys?

Well no technically speaking we don't really know much of anything about Oh-joo campaign except that he's in it. Which is just as well. A central part of the premise in "Lawless Lawyer" is that the system doesn't actually work, and it would be naïve for anyone to expect meaningful change from the top-down. The main gimmick the drama has going for it is that instead of rogue cops we have rogue defense attorneys, which means less vigilante fascism and more witness protection.

We don't actually get very much development of Sang-pil and Jae-i directly though. Strictly speaking we don't really need it. The early episodes were the ones who explained what they were all about, but because Hyeong-man is instigating all the action Sang-pil and Jae-il are basically just bystanders in their own story. At multiple point we get the whole hero telling the villain I will arrest you personally cliché, which in addition to being a little goofy also seemed flawed strategically.

Consider how Hyeong-man's attempt to solve the conflict by being a rogue cop is stymied by, well, by the fact that his actions are actually pretty predictable. By far the smartest thing Hyeong-man did was intentionally leaving a past job unfinished, for the right reasons, but not the right right reasons. Well, what can I say? If Hyeong-man was all that smart he wouldn't have joined Oh-joo's payroll in the first place.