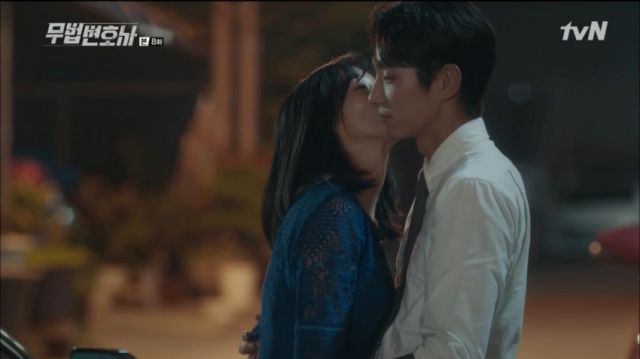 The romantic storyline between Sang-pil and Jae-i has become a serious problem, albeit not for the reasons I was expecting. Out of context the romance actually works pretty well. There's drunken walks on the beach, extended climbs up stairs in heels, and even the pointless obfuscation of their relationship around the office is pretty cute. The main issue is that Sang-pil and Jae-i aren't really paying much attention to the villains right now, which is a pretty dumb move considering they both taunted the villains directly last episode.

Instead, Oh-soo takes the initiative, and we're left watching him set up a trap for Sang-pil. I felt the trap left a lot to be desired, mainly because it required that Sang-pil act like a complete idiot when confronted with more information indicating that Dae-woong (played by Ahn Nae-sang) was in serious trouble. Sang-pil's inability to confide in Jae-i is especially ridiculous. What's the point of railroading their romance as quickly as possible if they can't even trust each other?

Jae-i's mom Hyeon-joo (played by Baek Joo-hee) makes much better progress, by taking advantage of the fact that no one knows who she is. Her entire scheme is really great, because we can see Hyeon-joo shivering in terror the entire time. That's not an act, Hyeon-joo really is frightened out of her mind. But as it happens "frightened out of her mind" is exactly the personality trait Moon-sook is looking for in an acupunturist.

Now that's taking good advantage of clearly established character traits. I also liked how the villains use soft pressure on Gi-ho to get him to attack Jae-i for them indirectly. Really, Gi-ho is just being a good sensible dad. Why does Jae-i want to fight the massive conspiracy, when there's a very good chance it will result in her horrible death? Jae-i struggles to answer that question- which is why this is a very common hook that the villains use to keep people under control.

But strong subplots can't make up for a very embarrassingly bad main plot. That whole cliché where the comrade begs the hero to just let him die comes off especially clumsily given that Sang-pil is not in immediate danger, and also Oh-soo's entire plan hinges on Dae-woong dying before the police show up. While there are hints that Dae-woong may have had an actual reason for acting the way he did, ultimately, that storyline left me feeling very unimpressed.