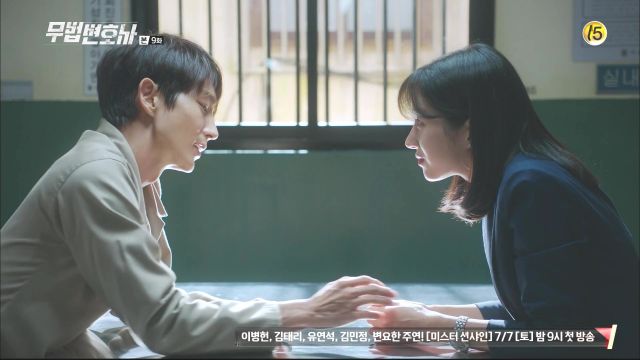 It's very obvious to us that Sang-pil did not murder Dae-woong, since we saw that whole scam play out directly. So all the usual noble hero wrongly accused stuff "Lawless Lawyer" is getting into right now? That's pretty well-worn. What's a lot more interesting is how all the other characters react to the accusations, because they don't know what really happened. Well, except Oh-soo, but even his storyline here hits some surprisingly unsuspected snags.

Mainly, that Moon-sook is really mad at Oh-soo for taking his own initiative. While I'd like to think that this is just because Oh-soo's plan was unnecessarily risky, in reality Moon-sook is just a psycho control freak. Which also works. What's also funny is how Moon-sook is surprisingly indifferent to what happens to Sang-pil, her sworn enemy. It's just, Moon-sook's desire to maintain her reputation, her displeasure with Oh-soo, and her desire to test Yeon-hee (played by Cha Jung-won) outweigh the extent to which she considers Sang-pil a serious longterm threat.

Yeon-hee herself appears to be oblivious to most of what's going on. I keep waiting and hoping for her to start to realize just how crazy corrupt Moon-sook's entourage really is. I mean that literally by the way. Yeon-hee's mom Soon-ja (played by Yeom Hye-ran) seems to always be trying to get on Moon-sook's good side by acting just psychotically enough that Moon-sook looks sane and even-handed by comparison.

Other characters who are affiliated with the prosecution service but not involved in Moon-sook's conspiracy are also left in an interesting spot. Do they think Sang-pil really did it? Well, actually, they're not sure, because Sang-pil used to be a thug, and he runs around calling himself a "Lawless Lawyer"with a dismissive attitude toward the legal profession. That's not exactly a strong endorsement of Sang-pil's moral character, even if in general he seems to align with the cause of justice.

In a weird way I actually kind of dislike how intriguing the supporting cast in "Lawless Lawyer" is because so many of them would be compelling characters in their own right. I mean come on, how do you not love the way Choi Min-soo growls in that thick Busan accent, or how the lesser members of Sang-pil's law firm act gaudy and goofy just out of reflex in serious situations? The big official court scenes, or even the dramatic stabbing sequence, come off as rather bland in comparison.