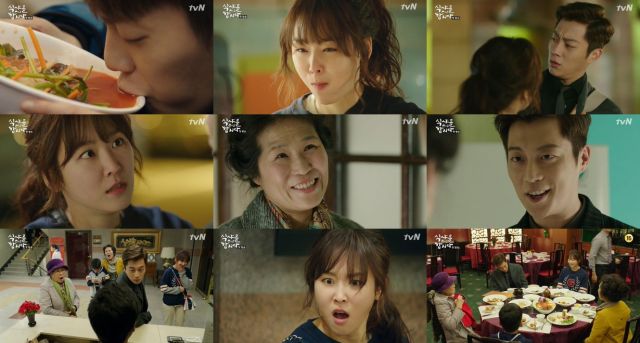 Dae-yeong (played by Yoon Doo-joon) has been forced to escape from Seoul due to his usual bizarre habit of managing to obtain unwanted extreme emotions from women he only wants to know casually. While we get several memorable flashbacks indicating part of what happened, the big question of why he broke up with Soo-kyeong remains unresolved. Whether it will ever be answered is unclear- although the implication is definitely that it was an interesting story.

And so, Dae-yeong moves on to a new city- quite literally. Sejong City is only a few years old, but as a second administrative capital can by no means be called a sleepy irrelevant town. What's more, everybody who lives there is transplanted from somewhere else, and director Park Joon-hwa accurately replicates the feel of a place that's populated almost entirely by modern architecture yet looks rather unsettlingly empty. There's so little light pollution the stars are actually visible at night.

As for the story...well, to be honest I'm still adjusting. After the first season of "Let's Eat" I just have a lot of trouble grasping Dae-yeong as a main character. The central mystery of the first season was what kind of person Dae-yeong is- and now that he's the perspective character I still don't really know. Dae-yeong takes everything so ridiculously light that he doesn't even really have much of a conflict.

By the end of the episode we finally discover that that Soo-ji (played by Seo Hyun-jin) has a dark mysterious past when it comes to food- and that to this end, she is dedicated for ominous personal revenge against Dae-yeong. And you know, that's a good sign. Just writing out these sentences I find my mouth kind of agape thinking, are the stakes in this drama really that high? Is the plot of "Let's Eat - Season 2" actually just going to be some sort of weirdly edited verbal battle between food critics?

The reason I'm pleased with this apparent turnabout is because I had the same sort of perplexed initial reaction last time around. The production team is definitely going for the same sort of "build interest by inspiring viewer incredulity" tone that was accomplished in "Let's Eat", and so far all the characters, even Dae-yeong, come off more as genuinely personably weird than they do actors in some sort of larger grand narrative. That's how you build an intriguing situational comedy, and I look forward to seeing more of what the second season has in store.