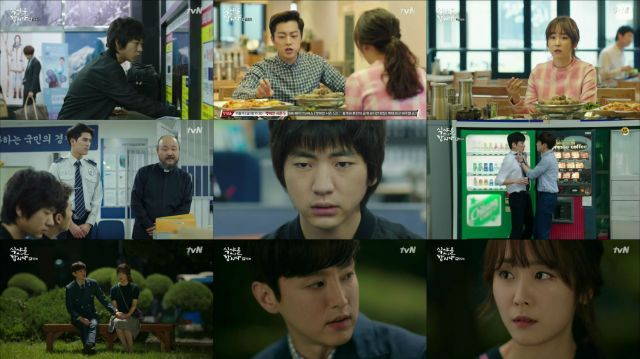 Maybe it's because life with Sang-woo just isn't that much fun. Up until actually getting the relationship Soo-ji has always seemed like the kind of person more interested in the abstract concept of a relationship than actually spending time getting involved in it. The gossip she overhears is flattering- to a point. Other times the gossip is just plain infuriating, not to mention absurd. What kind of crazy person could not consider Soo-ji attractive just on her own personal quirky merits?

...Hey, wait a minute, didn't somebody else say that? That's right- Dae-yeong made a specific point of complimenting Soo-ji in exactly this way a few episodes back. It was one of the drama's more touching moments because who doesn't like being told that they're attractive? The fact that Dae-yeong said it in a non-romantic context only emphasizes the fact that it must be true, because he had no expectation of a reward.

Beyond all that "Let's Eat - Season 2" is mostly just cruising to resolution at this point. Dae-yeong gets an opportunity to achieve his dreams from the first episode- and what exactly were those dreams exactly? It's weird thinking back to the beginning of "Let's Eat - Season 2" and realizing how the characters were actually kind of shallow, and the whole premise just riding on the coattails of the first season "Let's Eat". The production as a whole really has worked past that though, creating a meta-commentary that's gone along quite well with actual storyline.