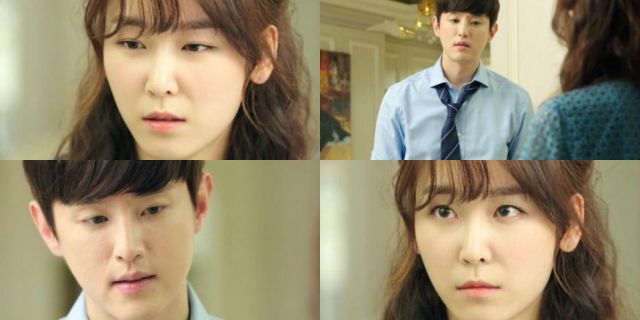 In the context of Dae-yeong leaving Sejong City after having only been around for a few months, this is appropriate and also ties in quite well to his character from the first season of "Let's Eat". Dae-yeong makes friends very easily even when he doesn't want to. What Dae-yeong lacks and doesn't even seem to particularly need is long-term attachments or long-term partners. Given that the man's first love is food, which he can literally find anywhere, this makes sense.

But where does this leave us as viewers? There's something very unsettling about the fact that the Dae-yeong / Soo-ji montage is the only that seems to involve genuine character growth and mutual appreciation- what's more, we even get the entire date at the end of the episode. Which I suppose technically isn't really a date. Although really, who would put up with that kind of corny stuff except for a man who genuinely enjoys spending time with the woman of his dreams?

This is an even thornier question than it sounds, because Sang-woo is the absolute picture of persistence here- yet he knows full well this can't repair the basic emptiness of his relationship with Soo-ji. Even more perplexing, the big speech Soo-ji ends up giving Sang-woo is completely correct- in a very anti-romantic way. Soo-ji presents a very compelling argument for why obsessing on romantic partners is honestly just kind of dumb, and how enjoying life means more than just wanting love for the sake of love.

I'm having trouble reconciling this with the obvious conclusion arc for "Let's Eat - Season 2", because it certainly seems like this drama has to end with Dae-yeong and Soo-ji ending up together. But won't this contradict what Soo-ji said about romance not really mattering? I honest to goodness have absolutely no idea- and this feeling is precisely why the "Let's Eat" series is so consistently excellent. It's just so delightfully ambiguous and unpredictable- they could rehash this franchise for a third season and it would still be among the freshest, most innovative storytelling on modern television.