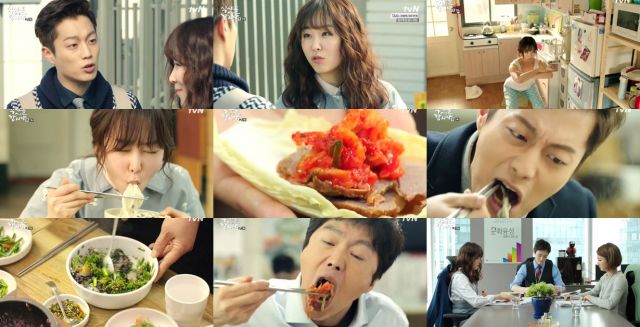 The first season of "Let's Eat" only aired one episode a week. "Let's Eat - Season 2", by contrast, is airing by the more standard two episode per week schedule. And it's this episode I quickly saw one of the more obvious disadvanatages of the more standardized intensive drama schedules- it kind of messes up the pacing. Whereas the first season of "Let's Eat" had to accomplish basic facts rather quickly, "Let's Eat - Season 2" mostly just runs in place. There's a lot of filler here- and we've only just established the basics of the premise.

We now know, for example, that Soo-ji has another goal in life aside from just spiting Dae-yeong. She really wants to get in on with Sang-woo (played by Kwon Yool), a man who as far as I can tell has absolutely no personality. After two episodes we really should have a basic grasp of all the characters- yet so far we only really know about Soo-ji and Dae-yeong. And Dae-yeong doesn't really count because his personality had a sixteen episode head start.

This episode is, to be entirely honest, really just kind of boring. There's just not a whole lot of plot- Dae-yeong runs around trying to contrive excuses to get people to have dinner with him. As good as Yoon Doo-joon is in this role, in "Let's Eat" his character was almost entirely a reactive one for good reason. Dae-yeong is better at delivering the punchlines to jokes than he is at setting them up, mostly because his main quirk is the ability to randomly take a conversation in a completely unexpected direction.

In some sense I may be unfairly demanding that "Let's Eat - Season 2" come off as fresh and innovative. "Let's Eat" was really kind of a lightning in a bottle thing, and I don't know that it could be easily replicated. Even so, a deliberate creative choice was made to link the two seasons by having Dae-yeong show up again, and to date we're still lacking a comparatively interesting hook. There's still time to improve on that- but my patience is limited.