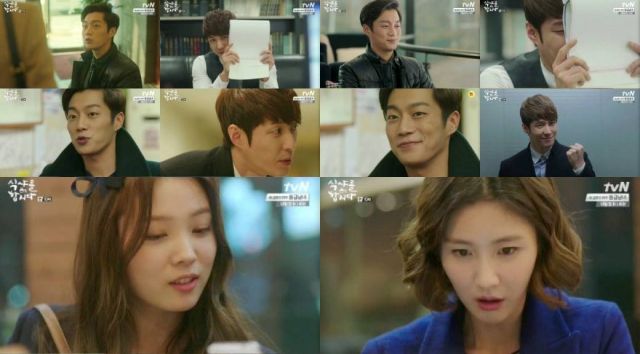 This drama is hitting the perfect blend of comedy, forward progress, and effective characterization. "Let's Eat" also benefits a lot from just being so self-aware. Note how Dae-yeong goes into one of his ridiculous food speeches on a regular predictable basis. This time he does one on a topic only tangentially related to food. And the other characters have started to notice when he's about to get into speech mode and react accordingly.

It's still using mileage gained from previous episodes, for example, to stoke viewer paranoia. It's manipulative sure- just because we saw a guy smacking people in the back of the head several episodes ago with no context doesn't mean every suspicious person we see is a secret murderer. But "Let's Eat" does a great job making a convincing argument for fear while at the same time making us realize this fear is basically irrational and dumb. And also that a scary moment can become a cute one with only the slightest reversal of context. It's an excellent demonstration of the general fickleness of human feeling.

In terms of actual plot stuff? Oh, the same old. Hak-moon is still trying, and failing, to come on to Soo-kyeong. Mostly because he's making such a powerful effort to avoid making her think anything other than that he's a gruff boss being kind to her because of course Soo-kyeong needs a job. I love Hak-moon as a love interest because he's just so bad at it. Not in the endearingly cute romantic comedy way, just incompetent. Incompetence is way more common than endearingly cute in the real world, so his portrayal really hits home even in the context of silly comedic sound effects.

Even though "Let's Eat" is, at heart, just a general comedy, I find it's way more effective than it should be just making me feel excited. The cliffhanger this time is a relatively minor story development that for the most part only exists in one character's head. But the possible potential of this little plot hook is huge! There might be a big honking (metaphorical) fight next week! Now that's entertainment. This is genuinely some of the most emotionally engaging comedy I've ever seen.