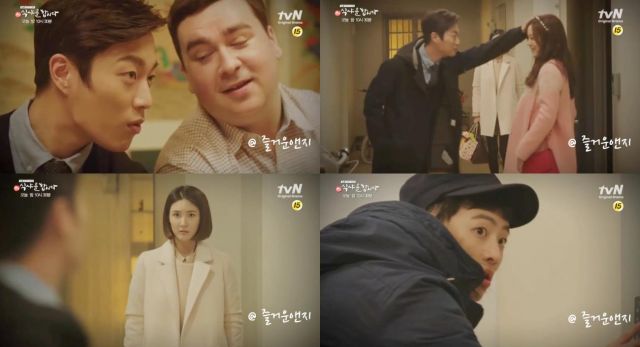 Somehow I had failed to notice that Valentine's Day was this week. Thank goodness "Let's Eat" was here to remind me of all those wonderful emotions we associate with Valentine's Day. Like, the fear of rejection, the sense of crippling loneliness, the realization that you're going to have hurt peoples' feelings or everything is just going to continue to be weird and awkward. Oh wait, love? Valentine's Day is supposed to be about love? Gee, could have fooled me.

There's a real dark touch to this episode. At first I was kind of annoyed because Jin-I and Do-yeon are still engaging in their game of petty romantic one-upsmanship, but it quickly became clear that was the point. Their shtick is getting old and it really needs to stop. Similarly, Hak-moon is clearly in now or never mode about coming clean to Soo-kyeong. And I have to admit that subplot resolved way more cleanly than I expected. To the extent it can resolve at all really.

The timing for a Valentine's Day episode is so great in the context of the overall narrative I wonder if the writer had been planning it like this the whole time. Considering some of these subplots have been brewing from the beginning of the drama that's pretty impressive narrative discipline. Who was thinking about Valentine's Day all the way back in December? That's not the kind of cohesion you get from writing in any TV series anywhere. Usually the holiday episode just gets slapped in kind of randomly.

Oh yeah, and there's also kind of a hint at a bigger storyline going on here. But the last time "Let's Eat" tried to convince us that a character was secretly a violent criminal, well, that just ended up kind of embarassing. So I'm holding a skeptical eye on these developments for now. Skeptical but optimistic- this is all around a great episode. The timing is excellent, and the comedy is on target. Whatever's coming next has just got to be great.