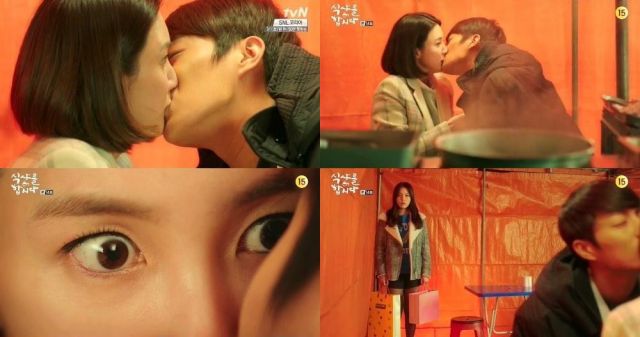 There's a sudden tonal shift in the first segment of this episode, as "Let's Eat" tries to be something akin to a horror story. It feels a bit weird, considering that for the most part this drama is a comedy so to all of a sudden have characters in serious physical danger is, well, a little off-putting. Don't we get enough paranoia in the actual scary shows? Especially since that guy's crazy face is just plain frightening, especially if the lights are out.

Then we get to the punchline. Yes, there is somehow a punchline that turns all of those preceding events into a comedic farce. I'm not normally too crazy about narratives that hide information, but when this is done to the service of a single, very funny joke? Now that's time well spent. Especially since the conflict created by the fallout of that joke is what defines the entire remainder of the episode, where plenty of other important storyline things happen.

Don't let the ending fool you by the way. If the preview is any indication, "Let's Eat" still hasn't decided yet whether it wants to be a romantic comedy or an anti-romantic comedy. How's this for irony- for the entire opener of the episode, we sympathize with Dae-yeong, who has no idea what's going on with Soo-kyeong. But for the entire rest of the drama up to and including this episode, we never have any idea what Dae-young is thinking. Again, in the early episodes, it was totally plausible that he was secretly a deranged killer because the man somehow manages to be extroverted and emotionally guarded at the same time.

It makes for an interesting contrast to Hak-moon, who spends most of the episode ineffectually moping. And it's kind of hard to blame him- the drama has done a good job making it look like his doom is completely inevitable. Maybe it is and maybe it isn't- but it probably is. The lead up to that very scary conversation is terribly worrisome, and yet when it's all over, maybe it wasn't so bad. I felt a little better at least.