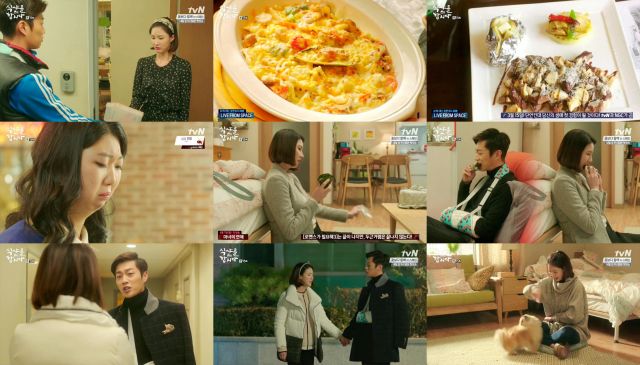 Well, the question of the point this drama has been getting at has been clearly resolved. Within the first few minutes of this episode the ending is more or less clearly established. I mean, it's possible that writer Lim Soo-mi will pull another screwball out at that last minute, but I kind of doubt it. The big strength of "Let's Eat" has always been its ability to mess around with us in the moment, not get overly witty with the overall narrative thrust.

And there are definitely some good moments here. There's the brief but memorable evil team-up, which looks so outrageously staged I'm surprised Soo-kyeong even falls for it. Well, not really. Soo-kyeong's problem has always been that she takes everything at face value. Which is another reason why the ending feels so predestined. We're only briefly stumped because of minor misunderstandings on Soo-kyeong's part, and those are pretty clearly and quickly resolved.

What else...ah, you may recall that "Let's Eat" does, in fact, have an actual villain. So consequently, for this, the final cliffhanger, we finally get a scary confrontation with no easy resolution. I'm a little put off by the extremity here, the sense of actual physical harm. Now, the last time the drama pulled this trick what we ended up with was relevant and funny, and "Let's Eat" has been so great that I'm sure I can extend the benefit of the doubt to one more episode.

Something else worth noting is that, as cheery and upbeat as I make this episode sound, there are still sad bits, where we see that there are people with clearly hurt feelings, who agonize about showing them. And it's a credit to this drama's production that it's so easy to empathize with these people. There's not any magical resolution that will make every character happy all the time. Again, though, that's just life. And "Let's Eat" has always been a top notch production in regards to effortlessly moving between laughter, sadness, and shocked tension.