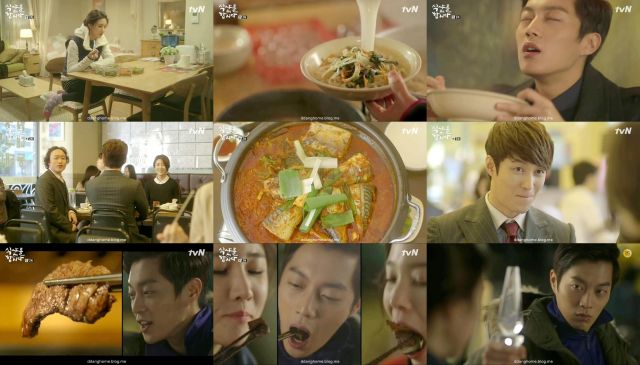 We still seem to be in the process of getting to know the characters, so not too much exciting happens over the course of this episode. Soo-Kyeong has a dog that seems to be a lot more trouble than it's worth, managing to find ways to start trouble if Soo-Kyeong turns her back for even a minute. Jin-I (played by Yoon So-hee) is continuously bright, bubbly, and naive. To some people that might be cute, but it's easy to see why Soo-Kyeong is rather wary of her new neighbor. And Dae-Yeong (played by Yoo Doo-Joon) is possibly an axe murderer.

I'm getting the impression that this last bit is the twist that's supposed to make the context of this drama, because this part of his characterization is just so bizarrely out of nowhere that it's actually pretty easy to understand why no red flags are running up for Soo-Kyeong and Jin-I. Well, Soo-Kyeong doesn't trust him because she hates all people everywhere. But so far Soo-Kyeong doesn't have any good reason to mistrust Dae-Young specifically.

To the contrary, this episode confirms that Dae-Young is an excellent cook. He can also prove it. Why Dae-Young cares about this is another one of the drama's mysteries- the trophy he keeps in his room is in the same slovenly state as all Dae-Young's other material possessions. Possibly this is meant to indicate him as the flip side of Soo-Kyeong- he actually cares about people and disregards everything else. We get a side-by-side comparison of all three characters cleaning up their rooms to help define their general differences a bit.

But again, while this would all be fine fodder for a typical situation comedy, the multiple ways this drama clearly spells out that there's something strange about Dae-Young make it difficult to tell what the narrative is trying to accomplish. I still really like the basically angry character of Soo-Kyeong. Given the people who she works with, it's hard to imagine that her outlook would turn positive overnight just through the power of friendship. It's not even that they're bad people- Soo-Kyeong just has an astonishingly low tolerance for any kind of social behavior that doesn't directly lead to food.

The trouble is none of this seems to be going anywhere just yet. "Let's Eat" has lots of clearly defined story elements. There's the misanthropic middle-aged woman, the food pornography, the gross-out humor, the guy who might be a murderer, and the art gallery, but what could these all possibly have in common? Cannibalism? You know, I can't really decide whether that particular plot twist would be terrible or amazing. We still have to wait and see.