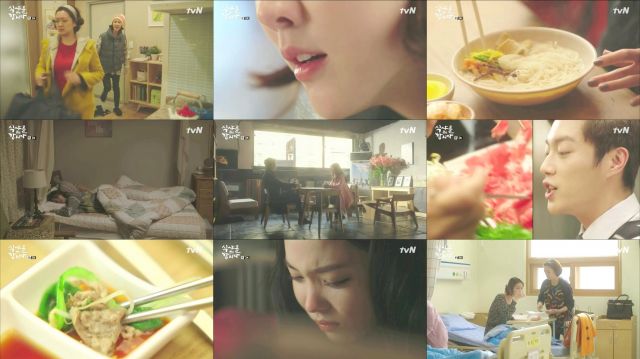 I really like the attitude this drama takes toward Soo-Kyeong's misanthropic demeanor. A more typical narrative would be about Soo-Kyeong learning the joys of friendship. And sure, we get the occasional moment where she's glad to have met certain people in her life. But for the most part, Soo-Kyeong's interactions justify her attitude. It seems like Soo-Kyeong can hardly go a minute in her moments relaxing alone before some people-related crisis comes in and disrupts everything.

It was only this episode that I realized that co-worker Hak-Moon (played by Shim Hyung-tak) is actually supposed to be a potential love interest. That's how effective "Let's Eat" is at portraying events from Soo-Kyeong's point of view. It's not that she's been burned by bad experiences. Rather, Soo-Kyeong is so completely alienated from the idea of willingly spending time with other people that the notion a person could be romantically interested in her is just completely beyond the pale. You know what the more logical explanation is? That he is an annoying pest, just like every other single character in her life.

Once again, it's the food that Soo-Kyeong really cares about. But I wouldn't say that it's the way to her heart. There's something much more animal about the way Soo-Kyeong scarfs down food. She can appreciate the good stuff, sure, but that doesn't mean Soo-Kyeong really knows or cares about the people who make it. Her social life is, once again, the bare minimum necessary to get access to quality food.

The general absurdity of all this makes for some excellent humor. Lee Soo-kyung (the actress) has a great sense of comedic reaction. There's a palpable outrage in the inconveniences she faces on a day to day basis that clearly infuriates the woman, in part because it just feels so justified. We've all had friends who seem to be taking advantage of us and our privacy in rude, inconsiderate ways. Well, Soo-Kyeong has had enough of that nonsense, and she's learned the best way to head these problems off is to be as clearly hostile and agitated as possible, so as to make the message an unambiguous one.

The humor is heightened by the drama's occasional sad moments. We get to see a dark side to Jin-I's life as a social butterfly. This kind of life attitude is generally portrayed as a good thing in most fiction, so the bluntness with which "Let's Eat" tackles the topic comes off as surprisingly emotionally honest. This is how you mix humor and drama in a situation comedy. There is simultaneously a thickness and clarity here that works on several levels, making for excellent characterization and entertainment even in the context of an as of yet light storyline.