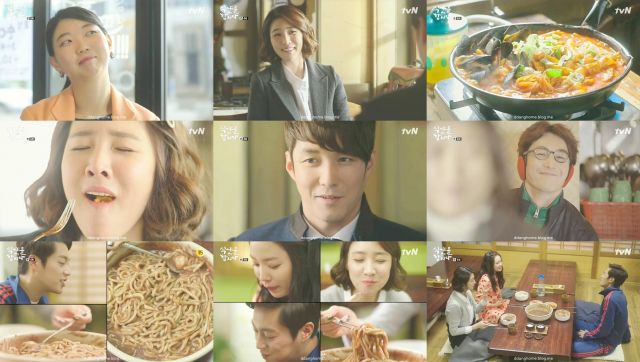 There's pretty much no plot progress this episode. Everything that could possibly shed some light on what the deal is with Dae-Yeong playing the knockout game ends up turning into a false start. The lack of progress on this front is a bit annoying, since it's the closest "Let's Eat" has to an actual plotline. Everything else is, for the most part, just character-based jokes along the same lines we've already seen.

We do get some relevant backstory about the history of Hak-Moon's interactions with Soo-Kyeong. I'm kind of amazed that he's known her for this long and yet still hasn't grasped the fact that she will do basically anything for food. Min-Joon's pornographic obsession with good food has been going on for a long time, and it's surprising that he didn't figure it out all the way back then. I love the look on her face upon receiving his present. It's clearly stating "why did he give me a present that is not food" rather than any statement about the dorky way Hak-Moon is acting.

But again, food is not the way to her heart. Soo-Kyeong has a strong, obvious dislike for Dae-Young even when he is in the midst of giving her delicious food. Of course, it's hard to tell because she seems to act that way with everyone. There's a great conversation with Do-Yeon (played by Lee Do-yeon...what is it with the actresses in this drama having the same name as their characters?). Actually, it's more just Do-Yeon just talking at Soo-Kyeong while the latter listens, expasperated, clearly thinking to herself that this kind of social nonsense is only tolerable when food is involved.

Other conflicts this episode aren't quite so exciting, mainly because they don't really relate to anything. Jin-I watches a scary movie and becomes convinced her apartment is haunted. Her youth is basically the only excuse for having a storyline this silly...well, that and the dog. In the context of a horror movie the dog kind of looks like a giant furry shrimp.

I'm kind of disappointed we didn't explore what the delivery guy was planning to do with the dog. What exactly can a person do with someone else's pet that would make the animal worth stealing? It would be dark territory to be sure, but again, this is a drama that's already clearly implied one of its leads is a serial killer and just isn't doing anything with the information. "Let's Eat" is still funny, but it really needs to start moving in a more ambitious direction instead of retreading the same general character material.