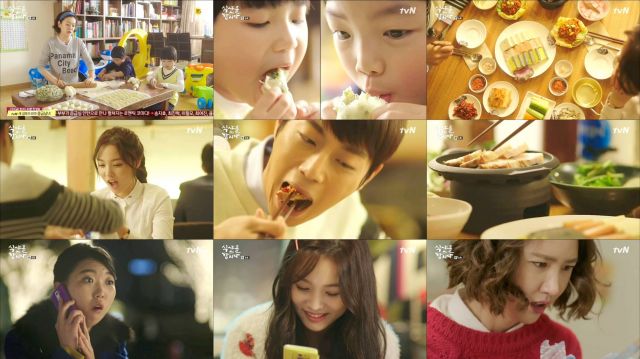 Soo-Kyeong discovers an essential bit of information that puts Dae-Young's entire character into question, and the rather unconvincing way he addresses her complaints only seems to bring credence to the idea that he is, in fact, that guy who keeps running around smacking women on the head. This isn't something she just sits on either- Soo-Kyeong makes a direct effort to find the truth when she finds Dae-Young's response lacking.

And then...the drama just sort of subtly points out that maybe Dae-Young isn't a violent thug. Granted, "Let's Eat" has given us plenty of shots of a man who looks like Dae-Young smacking people in the back of the head. But come to think of it, did we ever actually see his face that well or has it always just been kind of dark and murky? No, don't look at the older episodes to compare. That's cheating. That's not how memory works.

As a result, "Let's Eat" is now in the ambivalent place of Dae-Young maybe or maybe not being a murderer, but we can hardly assume that he is based on the spurious evidence there is right now, and that makes Soo-Kyeong's interactions with him terribly awkward. The weird part of all this is that she may well be right. It's not like Dae-Young's defender has shown the greatest judgment in the past. But a person can't live life just being super paranoid.

In other general story developments, I have to admire Hak-Moon's complete inability to usefully express himself to Soo-Kyeong. I like how the drama makes his communication failures a two-way street. Normally it's either the crush's fault for being an oblivious idiot or the crushee's fault for being too vague. In this case it's both, and since both characters are too stubborn to alter their way of thinking, well, that's that. My compliments to Lee Soo-kyung and Shim Hyung-tak for being able to pull off such effective reverse chemistry.