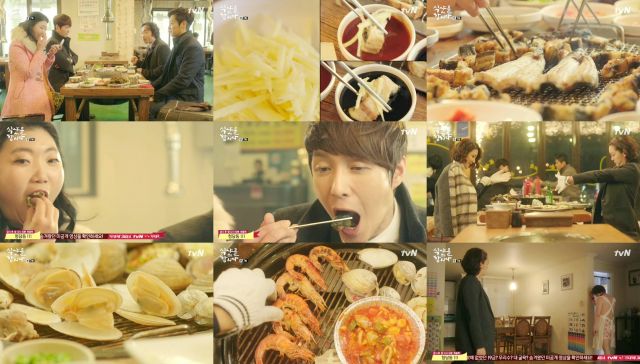 This episode answers the essential question- what exactly does Soo-Kyeong's life look like without the influence of Dae-Yeong? The answer...pretty pointless actually. As usual, she's stressed out and resorts to angry munching to vent out her stress. But in terms of the actual good stuff, the actual good food, it turns out that making bad with Dae-Young has substantially limited her access to it. Soo-Kyeong knows she's messed up- if not on the empathetic level, then certainly in terms of direct benefit.

The other people in her life make a poor substitute for a quality meal. We start out with Hak-Moon trying to pull off a Pretty Woman montage. However, he completely fails to realize that context is important for making such events work, and that they can't just be brought up out of nowhere. I found the assumption the employees make about who Soo-Kyeong is particularly hilarious, because who else would put up with that kind of silliness without complaining?

Ironically, even though Soo-Kyeong's main character trait is her cranky bad attitude, she has a lot of trouble directly complaining (or apologizing) about anything. Soo-Kyeong is about as aggressive as a person can be without actually directly attacking people. Which makes for lots of neat little moments, where characters assume that she is insulting them, simply because Soo-Kyeong's style is always indirect anyways.

It's funny how everybody's able to get her on one level without really getting her at all. Hak-Moon almost figures out the way to worm his way into her heart, only to blunder it by making a really dumb assumption about the way Soo-Kyeong processes certain information. Really, a lot of this drama is just people trying to manipulate their way into emotionally happy situations, only to find their plans constantly frustrated because other people come up with their own random spontaneous plan-ruining ideas.

Certainly, this has the potential to go cute places sometimes. In the confines of an actual marriage, we can see how this kind of ridiculous reasoning can actually be endearing, in a very strange peculiar way. For other characters, though, we're really just laughing at their pain. It's not a mean laugh. I do hope that these characters will eventually be able to figure out what it is that they really want without having to get totally drunk first. Maybe then they can look back on these antics with a sense of nostalgia, rather than the frustrating experiences they really are.