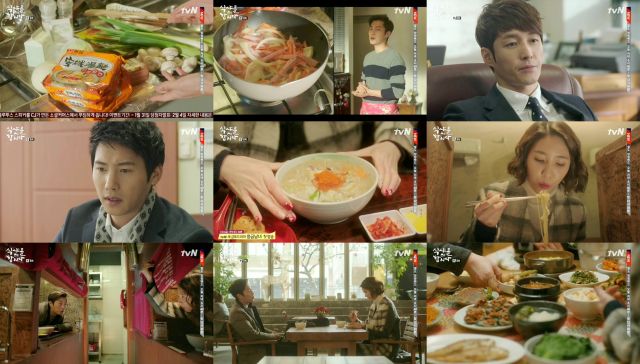 Hak-Moon seems to be on a mission to do everything possible to sabotage any hope he has of ever scoring a relationship with Soo-Kyeong. It's hard to make any other sense of his actions. Yeah, you saw her a couple of times with this other guy. But she's not going to like him less or you more because of an increase in stressful aggrandizing behavior in her life. Does this guy even have a plan?

Well of course not. That's because Hak-Moon's kind of dumb. Most people are, honestly, which is a big part of how the humor in "Let's Eat" is able to ring so true. Soo-Kyeong has a similarly poor reaction to Hak-Moon's lashing out, and the result is one of those ideas that seems smart at the time but the longer it goes on the less clever it looks. Hak-Moon and Soo-Kyeong have created an astonishingly stupid, unnecessary crisis that can't be resolved because they're both too stubborn and prideful to think anything through.

So where does that leave Soo-Kyeong? Well, she tries to find release by entering a series of comically tiny rooms, and acting as locked out and alone as possible. It makes sense in context, of course- but the visual metaphor alone is worth a big laugh. On a basic level, Soo-Kyeong is just too mean and too closed off to consider passive-aggressiveness and angry blowouts won't solve any of her problems.

The other characters have similar troubles with just speaking their hearts. But they're still doing a lot better since they're at least basically kind of happy. Sure they look silly, but at least they're not angry. The rumor mill...well, that's certainly a problem. Really, the big issue here is that even the characters here are all adults, most of them don't seem to want to grow up. But this isn't a result of bad writing, quite the contrary- I'm sure we've all met people like this.

So it should come as little surprise that Dae-Kyoung ends up coming off so well. He's not trustworthy, or necessarily even likable, but at least he's trying to do something other than sulk about and provoke people. This episode also makes it clear that these psychological predilections go beyond the immediate cast. The issue of mothers becomes a plot point. And it's absolutely worth paying close attention to how each individual character reacts mentally to various filial events.