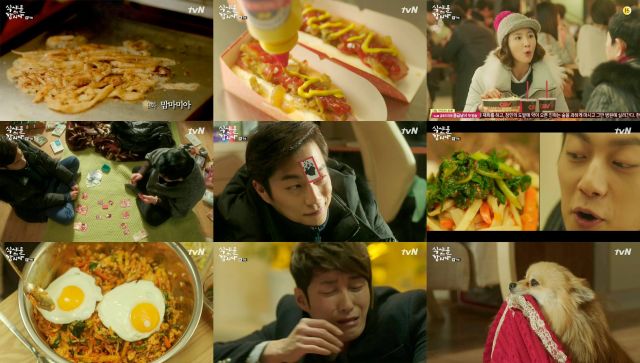 Like the title card says, this episode is all about Soo-kyeong's mother. On a basic level we're just taking a look into Soo-kyeong's psyche. A lot of the habits that we've seen so far as being quintessentially Soo-kyeong appear to be inherited. Soo-kyeong's mother is similarly hostile to the people around her, interpreting mild irrelevant actions as enmity. So naturally she responds in kind.

Meanwhile, at the office, or technically outside the office, Hak-moon is struggling with his impulsive decision to provoke Soo-kyeong into quitting, and comes to a rather ironic discovery. For all her mean stubbornness, Soo-kyeong is actually willing to put up with a lot just so long as she has food. Never mind the bit of romance- just on a personal level Hak-moon and Soo-kyeong get along tolerably. It's not a great working relationship, but it's something.

Beyond these general points of character development and realization...well to be honest nothing that much really happens. That's part of the point, of course- when so many of these people are stubborn just as a matter of general habit it's difficult to actually move the storyline forward because they don't want to. And it's not like there's anything the more emotionally open characters can do about it. They're not mind readers.

Fortunately, at one point one of our stubborn leads has a moment of impulsive annoyance and actually manages to ask a question that clears up a lot of misunderstandings, creating a clear opening for the narrative to move forward. The interplay of the actors in "Let's Eat" is very good, but without some kind of greater hook this kind of interaction could easily get tiring. However, since this episode has very good balance between character frustrations, obstacles, and finally making forward progress, this particular negative point is not something we need to worry about here.