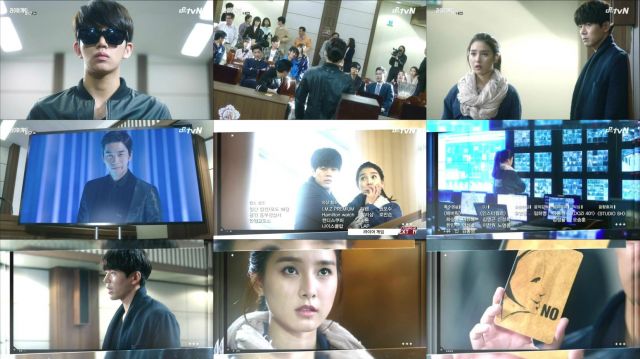 While "Liar Game" can't really overcome the basic silliness of the Keynesian Beauty Contest which makes up the second round, it certainly tries. There's all sorts of backstabbing and double-dealing that's actually fairly compelling. For the most part everyone here is a complete stranger. So figuring out who to trust and who not to trust pretty much boils down to paying close attention to what any individual wants (or doesn't want) us to see.

But aside from the basic thriller aspects of the game, this episode clearly spells out the operating philosophy Woo-jin and Da-jeong are going to use to get ahead. In a word, it's Machiavellian. I mean that literally. Machiavelli, contrary to popular belief, didn't advise prospective power-mongers to run around manipulating other people willy-nilly. His writings in fact recommend quite a bit of restraint and proper reading of interpersonal situations. While resorting to deceit is oftentimes necessary, it must be made clear to allies at least that even the most ruthless friend follows a code of personal honor.

This takes on particular importance in the context of "Liar Game", where the danger of losing is unusually risky. While some characters here take on cartoonish dimensions, others are reflective enough to realize that maybe they're not actually cut out for these kinds of interpersonal throwdowns. It's an essential human element here that goes a long way to softening the general absurdity of the backdrop.

"Liar Game" is in fact quite unusual as a Korean drama, which tend not go for this kind of farcical epic style. The overly dramatic way characters respond to events that don't necessarily mean anything yet is reminiscent of Death Note. The musical chords seem to replicate the grim spacy loneliness of Metroid Prime. I'm frankly a little ashamed to bring up nerdy references like that in a review like this but that's really the kind of feeling the drama's trying to evoke here.

And to date, it's doing that job quite well. "Liar Game" is doing excellent work balancing the wackiness of the premise which the kind of exaggeration necessary to make proceedings exciting, all while managing to come up with some reasonably intriguing moral philosophy. I don't know if the drama's actually going to be able to sustain this tone long enough to really become a classic or anything, but if it keeps chugging along at this rate it will at least be entertaining enough.