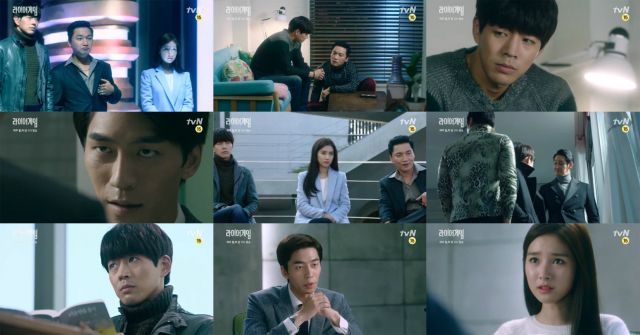 The opening is just more general doubt and uncertainty about who anyone should really trust, and all that. Don't expect any obvious clues about what the deal is with Do-yeong. I can get why "Liar Game" doesn't want to give too much information out at once, but really, this late in the drama we really need something a little more substantial. While the chat between Woo-jin and Dal-goo is somewhat informative, too much time here is spent on mostly meaningless conversations.

Then we get to the fifth round of the game, and I have good news- this is easily the most compelling competition we've seen so far. Part of it is just that the rules are ridiculously easy to understand. There's no complex negotiations here- just, what do you think the person on the other side of the table has in the suitcase? It also helps tremendously that all the interactions here are one-on-one. The minor characters get more clear personality exposition just from their attempts at lying and detection than anything they've done so far.

Do-yeong also fully steps into his own here as the clear villainous mastermind, with powers of deduction that at times even manage to surprass what Woo-jin is capable of. What makes these battles particularly ominous is that it's not clear what Do-yeong's motivation even is anymore. The man appears to be stirring up trouble simply for the sake of stirring up trouble. Even the other technical staff behind the game show aren't all that sure what Do-yeong is getting at.

But what really works to keep this episode engaging is the way the structure of the game works to keep the viewer engaged, because we can guess along with everyone else what's in the suitcase. Unfortunately, this only really works for the question of whether or not the suitcase is empty, because I'm not very good at eyeballing large quantities of cash and the drama doesn't provide us with a running tally of who has how much money. I know they tell us right away who won or lost, but I was always a little confused for that moment in between where we see the suitcase's contents and they actually say how much is in there.

Because the stakes here are so well-defined, the tension too is very dramatically appropriate. Pay close attention to what the teams do in their individual offices. Who's fighting, who's getting along, and why. And also note the moments where characters dare to think about the long term. As exciting as it is to get caught up in the excitement of short-term victory, this is a battle between Woo-jin and Do-yeong, and everybody knows it.