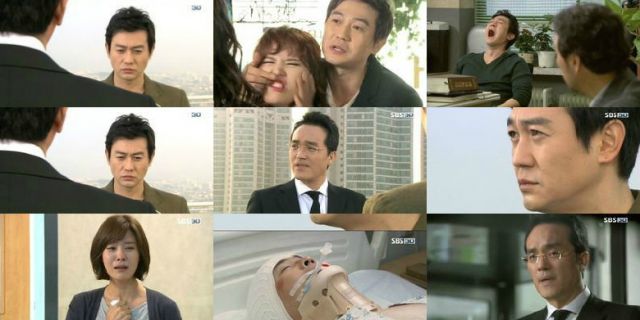 Jae-goo (played by Park Yong-woo) is a lawyer who's trying his best to ignore the fact that he's kind of a terrible person. The first we see of the man he's hassling the members of a funeral about their willingness to sue whatever amorphous entity they think may be responsible for the unfortunate death. The angry attack he receives in kind is unsurprising. Equally plausible is the fact that the next potential client he finds, while probably deserving of some sort of compensation, isn't exactly the most charming young woman.

The main interesting contrast the drama provides is that Jae-goo is not, by necessity, a bad person. In fact, injury lawyers like Jae-goo provide a very important service in society- they're often the only means by which individuals can challenge grotesque impropriety on the part of corporations. But Jae-goo has allowed himself and his life to be ruled by his job to the point that he never really considers whether the way he works could be improved and be allowed to made more normal.

It's an interesting topic for a Lunar New Year's drama special- while a specific point is made of Jae-goo's less than ideal relationship with his estranged family, the implication isn't that Jae-goo should stop working. It's that Jae-goo should be working in such a way that he can actually discuss his job with his young son in a way that inspires pride and admiration. Jae-goo's approach to fatherhood, like his work, is made very abstract. Jae-goo needs a fairly extreme kick in the pants to actually get his act together. Jae-goo is coldly and harshly called out on his callous moral efforts, and quickly makes a point of getting his act together for the sake of justice.

In case you haven't guessed, the storyline is mostly predictable. The specific twists and turns of the mystery Jae-goo is investigating are the main point of general interest. A few facts elevate "Life Tracker Lee Jae-goo" somewhat. In the first place, the performance by Park Yong-woo is pretty good as are those by the rest of the cast. These are, for the most part, simple uncomplicated people who try to struggle with tragedy.

This really is the basic essence of effective, workmanlike television drama. No one here is larger than life, nor do they particularly need to be. "Life Tracker Lee Jae-goo" doesn't attempt to make any broader statement on the human condition or lawyering in general, and the drama is much better for the effort. These characters have to do the best with what they have, and that's a situation we all get stuck in.