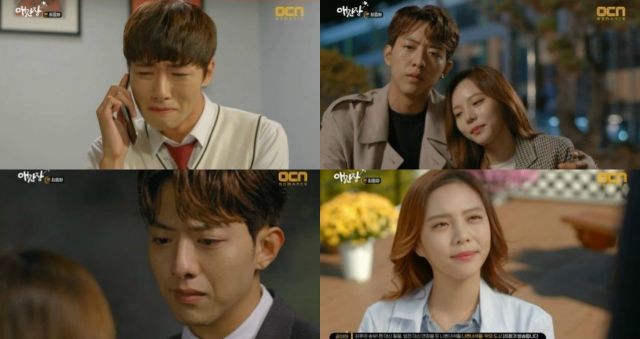 So the big breakthrough moment ends up coming through courtesy of Sin-woo's mom. The way "Longing Heart" brings us back to this plot point is very awkward, since it calls attention to the fact that Sin-woo's mom knew that Sin-woo had traveled back from the future, yet completely failed to heed his warning about the danger of taking that ferry that day. I'd like to think that if a future version of one of my trusted relatives came back and told me not to do something, I'd not do it.

Admittedly this was probably a better way for writer Park Ga-yun to resolve the conflict compared to using Sin-woo's very poorly defined time travel communication powers. Actually, when we saw Ji-soo at the bridge I was kind of hoping that she would travel through time too, however briefly. But then "Longing Heart" has already been established to exist in a closed time loop. Also this would call further attention to how young Ji-soo and old Ji-soo are played by the same actress, unlike Sin-woo, the only character whose appearance meaningfully changes over time for some reason.

But all of this pales to the thematic problems at play. There's a conversation here that just sort of made me suddenly realize that actually over your high school sweetheart for ten years is actually really creepy. Even though Sin-woo is not the character discussed in that conversation, it's very awkward realizing that his motivation is fundamentally identical to that of the drama's very weak villain.

Well wait, you might be thinking. Ji-soo likes Sin-woo too, so it's not that creepy, right? While this is sort of a defense, we're still looking at a ten year passage of time here, over which we would logically expect Sin-woo and Ji-soo would have major life experiences that would completely change who they are as people. You know how dramas sometimes force the leads to separate for a year at the end for no reason?

This is literally ten times as bad as that, especially since they don't communicate with each other at all. Maybe I'm overthinking this. Oh who am I kidding, I overthink everything, it's my job. I'm just really unnerved at how the first episode played out Sin-woo and Ji-soo's once in ten year reunion fairly realistically, yet they're all happy and lovey-dovey in the latter half of the episode without having actually spoken to each other that much.