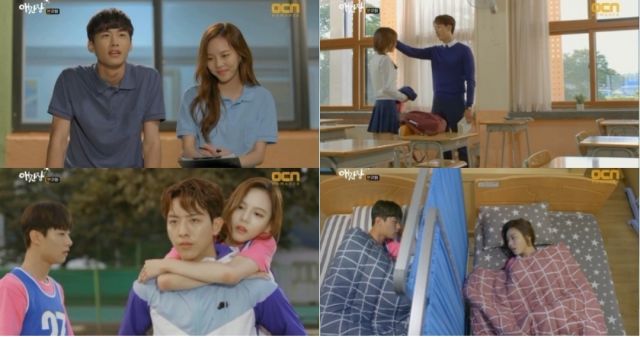 While the first episode gave the clear impression that this was going to be the older Sin-woo's story, and that there was going to be more going on than just his attempts to drive the younger Sin-woo and Ji-soo together, so far that's pretty much the only storyline we have. We barely know anything about the other characters. So-ra (played by Min Dohee) is now Ji-soo's best friend, and has effectively brought her into the larger group, but the two have barely any screentime together.

Strictly speaking "Longing Heart" doesn't need to have anything except the main plot. I'm just surprised somewhat by how boring it gets without any alternative storylines to liven up the action. "Longing Heart" probably works better in its original web drama format, consumed in fifteen to twenty minutes chunks. There's only so much of young Sin-woo and Ji-soo being cute I can tolerate before I get agitated waiting for something to happen.

In all fairness the older Sin-woo feels the same way. I like the sheer desperation he feels sometimes, trying to bully the younger Sin-woo into making a a decisive move for Ji-soo's heart, but the younger Sin-woo is just too much of a coward to make a serious attempt. The older Sin-woo's credibility only takes further hits as a lot of his advice turns out to be wrong, implying that the real Ji-soo is more complicated than the dreamgirl of his memories.

The most obvious example, which both Sin-woos are slow to notice, is that Ji-soo is fairly obviously lonely. Consider her actions at the big sports festival. For a transfer student Ji-soo is awfully eager to impress people. That's an important angle to the older Sin-woo's recollection of the love confession Ji-soo rejected. Even when being mean, Ji-soo is always making an obsessive effort to be nice and likable. It's honestly a little sad just how demure Ji-soo is, and unwilling to stand up for herself.

The depression angle is also the only real sensible way to interpret the older Sin-woo's shocking newspaper related plot twist. It shouldn't actually matter what happened in the future, since Sin-woo's actions have presumably already changed whatever destiny was forthcoming. That is, unless he's always been misreading the situation with Ji-soo. I want to see the older Sin-woo succeed, not in the matchmaker role, but in the being a good teacher role, because what Ji-soo really needs right now is a mentor figure, not a boyfriend.