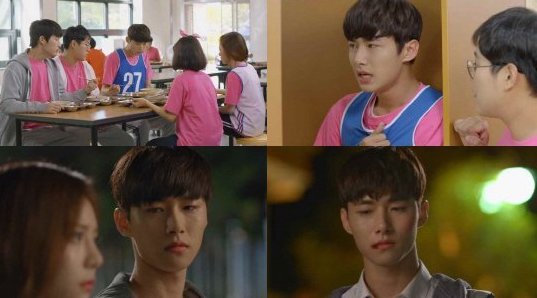 Na-hee (played by Jo Seung-hee) is Sin-woo's fellow teacher. Naturally, Sin-woo remembers Na-hee as a teacher from high school, and so has always been creeped out by the obvious romantic pretensions Na-hee has toward him now in adult form. I rather like this subplot, because it's the most explicit example we have of how Sin-woo's memories of people from high school are different from what these people were actually like. As Sin-woo's teacher, Na-hee had inherent dignity. As Sin-woo's colleague, she has almost none.

Also note the extent to which Na-hee rationalizes. When Sin-woo tries to talk her out of the crush, he acts under the obviously incorrect assumption that Na-hee's compliments were actually sincere, as opposed to thinly veiled attempts to make him like her more. Considering that Na-hee's alternate timeline love interest is played by someone as homely as Ko Kyu-pil, this should not come as a surprise to him.

Nor should it come as a surprise to the older Sin-woo that Ji-soo's secret crush is on him- the older version, not the younger one who's making an active effort to be her friend. Time travel elements notwithstanding, I rather like how Sin-woo's main problems tend to be problems that would be faced by most new teachers. This helps keep the "Longing Heart" grounded in reality, and maintains Sin-woo's likability as a protagonist.

The younger Sin-woo part of the story is also quite strong on its own even without the older Sin-woo's interference. We can see that both Sin-woos are smart, decent young men. Yet they also have huge blind spots that make it difficult for them to pursue what they really want. The younger Sin-woo concludes that his happiness and Ji-soo's happiness must be mutually exclusive. Like the older Sin-woo, he does this by taking Ji-soo's comments at literal face value.

Of course, the obvious irony there is that if the younger Sin-woo was acting more self-interested, and trying to use Ji-soo's confidence in him for personal advantage, then he would just come off like a little jerk. That the older Sin-woo is trying to encourage the younger Sin-woo to act more selfishly, well, that's just the more subtle irony. But going by the preview, it looks like both Sin-woos are going to have to experience a more serious tragedy before they can solve the conundrum of all this teen romance drama