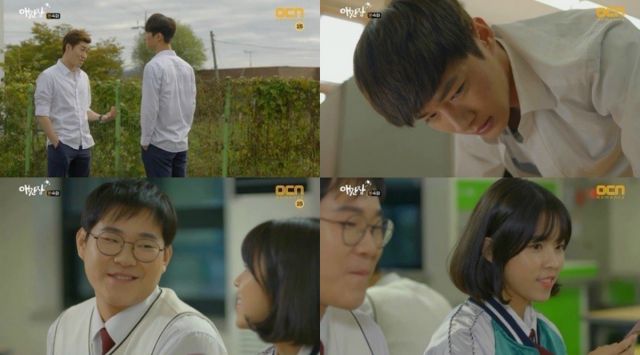 I've been wondering, who was Sin-woo's teacher in the original timeline? What happened to that guy? Why didn't he show up this time to take his job? It's a question that has become increasingly relevant as Sin-woo's memories differ from events in the new timeline. Although the bigger surprise is how much events don't change, or how they change in ways just minor enough that Sin-woo still mostly correctly guesses what has happened, save for a few minor details.

I find it funny, for example, that Sin-woo remembers about the huge smoking incident only after it has happened. In all fairness Sin-woo probably just forgot about that until it became relevant. Although really, meeting Ji-soo in the school after hours was a dumb idea however we look at it. And I'm still struggling to figure out how they accidentally got trapped. It seems like that wasn't even the fault of the fire, just a failure on both of their parts to remember when the building closes.

What's a lot odder than the main plot here, though, is the way Sin-woo abruptly decides at the end to just leave, his job apparently having been finished. If I didn't know better I'd think "Longing Heart" was wrapping up completely, when this is actually just the halfway point. Also, a lot of fairly fundamental storybuilding points haven't even been discussed yet, like what the whole deal is with that ominous funeral where everything goes wrong.

My main issue with this episode is that its too transparently plot-oriented. Sin-woo and Ji-soo meet up at night, they get stuck, and eventually the younger Sin-woo is blackmailed. There's no character development anywhere. We already knew that Sboth Sin-woos mean well and that Ji-soo is, for unclear reasons, emotionally needy. But at the end of this episode we have no better understanding of how they got that way than we did at the end of the last one.