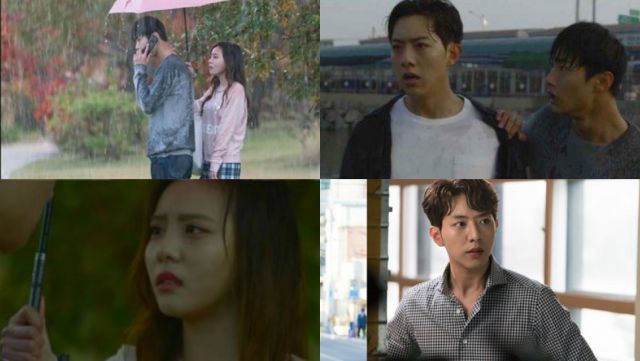 So apparently the reason Sin-woo never put any thought into the bigger problems of his having inadvertently traveled through time is because he thought the process could be easily repeated the exact same way. I do have to admit that Sin-woo's rude realization that the situation is more difficult than that fits well into his characterization of being pretty smart, but not that smart. The same goes for the warning to his mother. Sin-woo really should have emphasized that the reason why she shouldn't go was because of bad weather.

Aside from that singular story arc...not very much happens, actually. The younger Sin-woo does get very, very close to finally confessing to Ji-soo. Although the more interesting detail is what prompts Sin-woo to suddenly be more assertive than usual. Appearances notwithstanding, Ji-soo clearly explains to So-ra that the flyer isn't what it looks like. So the implication is that Sin-woo's own actions were what caused Ji-soo's opinion on that subject to change.

Or possibly just the surrounding tragic ambience behind what happened to Sin-woo's mother. That's been one of the more interesting background story notes, and while I'm relieved that "Longing Heart" is finally getting in to what's happened there, I'm also a little annoyed at how the drama has been withholding this information. The unfortunate implication created is that Sin-woo cares more about salvaging his first love than he did about saving his own mother's life.

But whatever the causes by the time we get to the cliffhanger the mood is fairly dour, and only uplifted slightly by the twist that Sin-woo appears to have succeeded in a completely different goal at the worst possible moment. Some more dramatic consistency would have been nice. There's nothing here that could really be called a setpiece. Sin-woo never gets around to any serious dramatic action. The closest he gets is trying to move really fast from place to place.

Which is ironic, considering how many of the outtakes are just Lee Jung-shin doing his own stunts. While none of the stunts in "Longing Heart" are all that impressive, in the context of filming, I can see how they could end up being really, really annoying. The agitation Sin-woo expresses at various moments of nearly drowning or being hit by things appears to have been real, and created largely through director Min Yeon-hong ordering an excessive number of takes. Well, whatever works.