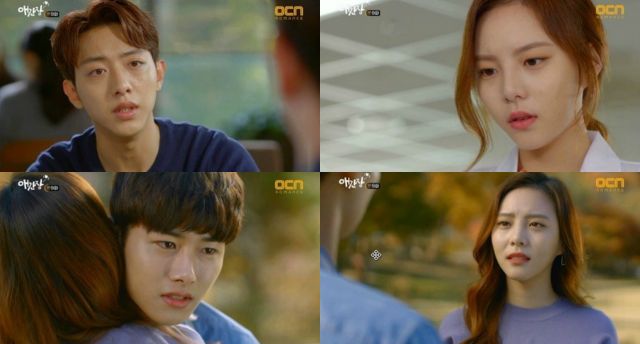 So Sin-woo does indeed have a steady job. I was just kind of surprised by that, what with how he seemed to have all this free time to run around looking after his younger self and also go time-traveling. Well, all right, time traveling by definition means he can come back whenever. Apparently the younger Sin-woo also has this ability. I was very surprised when, after all the trouble the older Sin-woo had to go through to go back to where he came, the younger Sin-woo successfully accomplishes the task off-screen.

But then if I'm going to nitpick anything it really out to be how nonsensical the continuity becomes once the two Sin-woos are separated and are still able to...communicate? Sort of? Eh, that's not really worth overthinking anyway. This does render the cliffhanger rather incomprehensible, if reasonably tense. The older Sin-woo does not, after all, have any apparent means of preventing his younger self from making stupid decisions.

Up until that point "Longing Heart" is just about, as the title implies, Sin-woo and Ji-soo's own longing heart. There I was surprised at just how compressed their whole love story was, especially when presented in terms of flashbacks which make it clear that the two of them didn't really spend all that much time together. Wait, how much time did they spend together anyway? Was Sin-woo time-traveling for a few months there?

The main plot of "Longing Heart" invites so much overthinking it really is a relief when we take a step back to watch the romantic subplot between Geun-deok and Na-hee. There's very little substance to this subplot. It just amounts to Na-hee having to learn that it's OK to date a former student when he's, like, in his late twenties now. Besides, he's so cute and persistent! How do you say no to an adorable face like that?

In a way this also mirrors the main conflict between Sin-woo and Ji-soo. Time and again, they keep finding elaborate new excuses to say no to each other, denying how they feel. It's frustrating the way they keep coming up with new rationalizations. We can always see the logic at play, the attempt to play off sincere romantic feeling in an unnecessarily noble way, and how this faux nobility keeps ruining everything. Sin-woo and Ji-soo only have one episode left to learn now, that it is OK to want things.