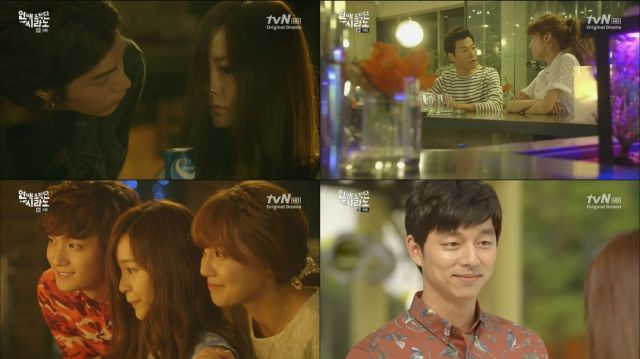 After the horror-tinged ending to the last episode, it's appropriate that "Love Manipulation Cyrano" now moves on to an entire episode fueled by fear. It's not a scary fear, though. Despite appearances to the contrary the spooky girl (played by Jung Yu-mi) is not actually haunted or dangerous in any way. It just seems like that because her crippling shyness has shut her off from the rest of the world- especially the men.

The most appropriate, and immediately recognizable bit of Jung Yu-mi's performance are her perfectly placed bangs which always obscure half of her face. It's what makes her look like she just walked off the set of a horror movie, and the way it obscures her face shot after shot really does emphasize how closed off she is. It's a little sad to watch, but in a funny sort of way. Her spookiness is so at odds with the rest of the general design that just the contrast, in many cases, is worth a laugh.

This is probably the simplest job the Cyrano Agency has had to date, as her treatment mainly consists of just talking to non-threatening men Moo-Jin and Ah-Rang. The episode excellently captures how this kind of shyness is a two-way street. It's not that she wants to be spooky- it's just a reflex reaction when speaking to an unfamiliar man. Just spending an extended period of time sitting and talking does a lot for her in terms of training her out of this kind of thinking. When the time comes to meet the man of her dreams, it is quite literally a struggle of facing her fears. More than any other client seen so far, I really rooted for Jung Yu-mi's spooky girl. For her, just coming to the Agency itself was likely a gargantuan challenge.

There's a great deal of character development for the regulars as well. Moo-Jin realizes that, while he has no specific problem with fear, the spooky girl's rationalizations mirror his own. Ah-Rang's generally ill-defined role in the show is given a spotlight as he starts to look at romantic relationships considering the spooky girl's off-putting perspective in mind. Everyone else gets a good dose of fear psychology as well- though their discoveries are best left to surprise.

This has been my favorite episode of "Love Manipulation: Cyrano" to date. It deals with an unusually relatable element of love manipulation. That of manipulating ourselves into doing things we may not want to do owing to fear, pessimism, or a lack of a clear plan. Characters have to accept themselves, and accept others, in order to get forward. It's a surprisingly mature and thoughtful message- and it goes down quite well with the drama's usual blend of subtle, smile-inducing comedy.