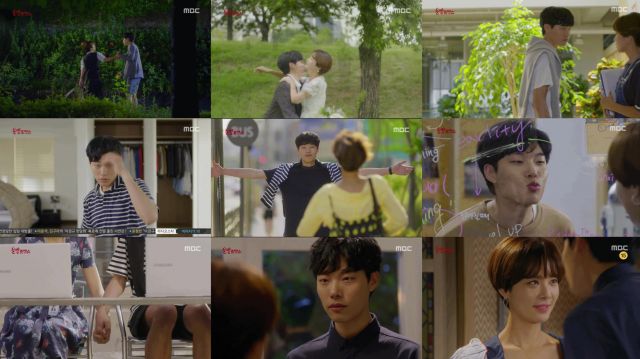 For a spell "Lucky Romance" continues to be sickeningly, adorably cute with its main romance. It's hard to hate a drama that's obsessed with its own sheer goofiness- I guess maybe because of the way it works in memory? That's the fun part of being together with a new person, after all. All the minor gestures which keep saying in as explicit possible terms "I like you and wish we could spend more time together". Soo-ho even brings that energy to exposing the not-so-secret relationship everyone has not been able to acknowledge at work.

Then the drama gets weird. The family-related twist we've been expecting finally pops up. It's not the obvious twist, though, but rather the alternative twist that doesn't really make sense because I was pretty sure we'd seen this character in flashback and that he did not bear any resemblance to the present day actor. Well, I never really paid much attention in the first place, so why start now?

But the real frustration comes when writer Choi Yoon-gyo, having long ago given up on trying to be accurate on game design, decides to write a story about industrial espionage that manages to be even more idiotic. Like, I don't even know where to start on how stupid this plot is. The villain's plan should not have worked. Even with access to the office he would not know which computer had the appropriate files or where the files were located on the computer, let alone have any idea how to manipulate them without someone noticing. Nobody on this crew has last minute bug checkers?

What makes this plot point so agitating is that it's painfully obvious why Soo-ho does the heroic thing and becomes a martyr to a situation that's not his fault- to protect Bonnie from blame. The problem with this is that in real life, such a high-level hack would require the assistance of a technical co-conspirator. The "wrong" theory is in fact the correct one unless I twist my thinking in such a way to believe that cyberterrorism is so easy that any idiot with spiked coffee can pull it off.

I don't like having to put thought into this stupid storyline when "Lucky Romance" had just finished making a point of how it can be sweet and fun when dealing with material that's much less serious. Like Dal-nim. Somebody really needs to get on the phone with Lee Cho-hee's agent and get her some better roles- she transitions perfectly from effervescent excitement to horrified embarassment.