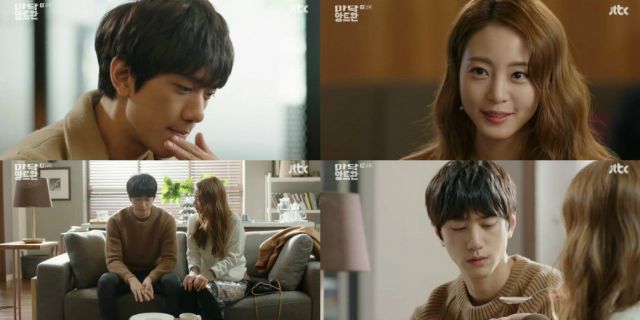 Soo-hyeon gets his just desserts as Hye-rim finally (apparently) gives up on him. It's legitimately really hard to feel bad for the leading man here given that he's been begging for this treatment for pretty much the drama's entire run. Ironically enough, his main sympathetic moment here comes courtesy not of Hye-rim, but rather his mother. While it's easy to feel sympathetic to her in the present day, as Soo-hyeon points out, her actions caused some pretty huge psychological issues that can't simply be ignored.

Sort of like the flaws in "Madame Antoine" itself really. Look, there are good points to the drama. Like Mi-ran. Now there's a woman who knows how to enjoy herself. And you know what? Good on Seung-chan too, for not letting a little weirdness ruin a perfectly good friendship. Mi-ran was rightfully scared that Seung-chan would back away from her once the romantic interest was acknowledged, and Seung-chan rises above that without necessarily reciprocating.

But what about our other romantic subplot- the one that has apparently made a ridiculous amount of progress over the course of two weeks? Actually, a whole lot of stuff manages to happen very quickly over the course of two weeks- more than seems probable. I don't see how Hye-rim has such an easy time moving around. Usually that kind of thing takes a lot of planning, especially considering that Hye-rim owns her own business in Seoul.

Basic logic has always been a major weak spot in "Madame Antoine". That's a pretty big problem considering that psychology or even just Hye-rim's cold readings involve a lot of logical elements. When either Soo-hyeon or Hye-rim makes rational statements regarding limited information, the wisdom of their remarks is almost immediately called into question by the elaborate mess of their own lives. Observe how Soo-hyeon is still trying to rationalize everything in terms of experiments. It's just too much.

The most annoying part of all this, though, is how rushed the story can feel. We could have had Hye-rim call Soo-hyeon out on her knowing the particulars behind the experiment a long, long time ago and there would have been much more time to let the reunification feel more organic. Instead, the part of the story that involves everyone knowing everything ends up feeling uncomfortably short- and this goes for the subplots too. More than anything else "Madame Antoine" really needed much better pacing.