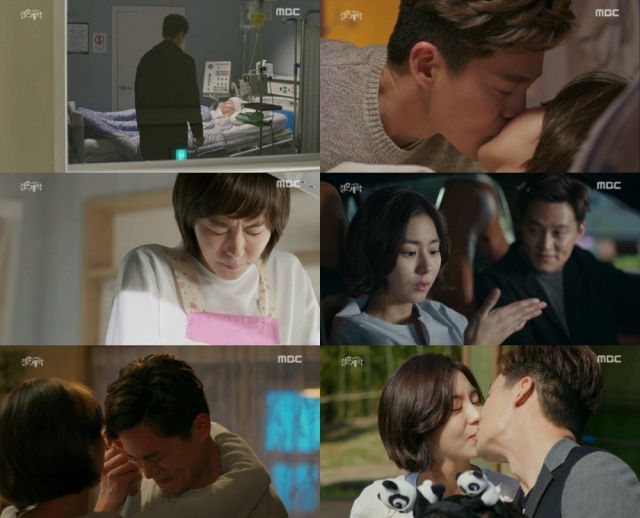 The balance between inevitable tragedy and familial contentment is rather off as the ending to "Marriage Contract" is frustratingly open-ended. It's not even ambiguous or anything- most of the conflicts are straight up left unresolved, and there's no epilogue. Just a recap of what's happened. For a sense of perspective, the last we see of Seong-gook, he's randomly throwing things. We don't get to see what happened to Jeong-hoon at all.

Although as usual, Na-yoon bothers me most in the supporting cast. She receives a somewhat happy ending even though there's precious little evidence Na-yoon actually appreciates that her behavior was inappropriate beyond Ji-hoon's lack of reciprocal interest. Ji-hoon remains surprisingly unbothered by the fact that she led his brother on to the point of engagement. I would have a great deal of trouble being civil to any woman who treated my brother that way, no matter the circumstances.

Which is also probably why I was so disappointed in the last episode of "Marriage Contract". As a melodrama, the success of "Marriage Contract" has always been in its ability to provoke a visceral reaction in viewers. I've been really into the internal struggles Ji-hoon and Hye-soo have faced to date because there was this sense of inevitability, this power of reality, that in the darkest moments was this all-encompassing force of impending dread. And then the production team just sidesteps that to deliver a mostly harmless and conflict-free resolution.

Sure, there's a big romantic kiss in there. Yet the payout feels rather hollow and unearned because there's no emphasis on the long term. Indeed, scenes immediately following the kiss demonstrate how no one's really acting like Hye-soo is a sick woman who needs to be taken care of. Considering how Ji-hoon is still at an awkward place with his own family, in broad perspective "Marriage Contract" seems to be trying to give us a happy ending without actually dealing with the obstacles that had been preventing that outcome.

Bits and pieces do remain all right, but much of the resolution only served to remind me of how underdeveloped the smaller story elements were. Hye-soo has the heartfelt meeting with her dead husband's mother, except we don't really know why they were estranged in the first place. Characters at the restaurant have distinct personalities, yet no real meaningful presence in the story. Possible romantic subplots never went anywhere. Oh well. At least the melodrama was pretty effective, while it lasted.