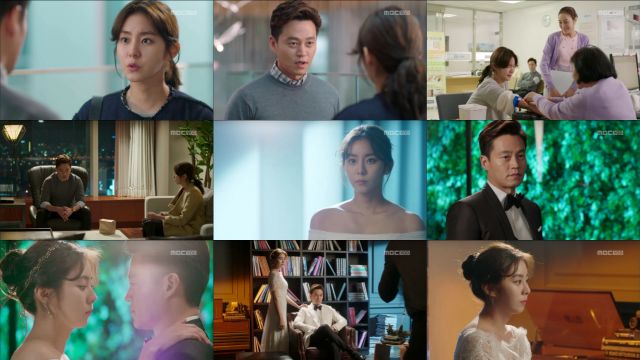 The relationship between Ji-hoon and Hye-soo remains icy. They don't like each other very much, and it's easy to see why. Ji-hoon legitimately has trouble so much as processing Hye-soo's motivation, which is suitably ironic given that he himself is motivated entirely by motherly love. It's just that in Ji-hoon's eyes, saving Mi-ran is more a goal he should be striving for than one of emotional merit. Ji-hoon's pointed verbal attack against Mi-ran at the end really stings in part because he's right. The situation is in fact her fault. Mi-ran is a hard character to pity.

So is Ji-hoon for that matter. Brief moments of restaurant employee gossip firmly establish that Ji-hoon is not a popular boss, and that they know he's little more than a soulless suit. Where "Marriage Contract" really excels is in showing what it's like for a person to live daily life as a soulless suit. Ji-hoon's ex-girlfriend Na-yoon (played by Kim Yoo-ri) is especially brutal in her appraisal of Ji-hoon's personality, yet she's basically right about him.

Hye-soo is appropriately bewildered by all this. I like how she obviously finds the situation bizarre, but is willing to bite her lip because she needs the fake marriage as much as Ji-hoon does. Even so, Hye-soo is able to live life on her own terms. Observe how with Eun-seong, Hye-soo is able to take joy even in such small pleasures as eating meat because life is about enjoying oneself. Living is not a means in and of itself.

That's the sense of wonder that's missing from Ji-hoon's fairly stiff family relations. Ji-hoon gets along all right his family, but never really talks to them. This aspect of his life is an essential plank to Ji-hoon's greater plan to convince people that he could maintain a secret girlfriend for so long without they're knowing. Even Ji-hoon's sense of humor feels slightly wrong. He mostly fails to grasp the irony in Hye-soo's suggestion for how they first met.

There's a lot about Ji-hoon that's fascinating yet oddly probable in a lot of ways rich family dynamics aren't normally portrayed in media. Ji-hoon is more clueless and out-of-touch than he is genuinely malicious. Just look at his preposterous car, or his surprise at seeing the home of a lower-class person. Then compare Eun-seong, and how there's something all-too-adorable about how she's finally found a cute animal that probably won't accidentally find some way to kill her.