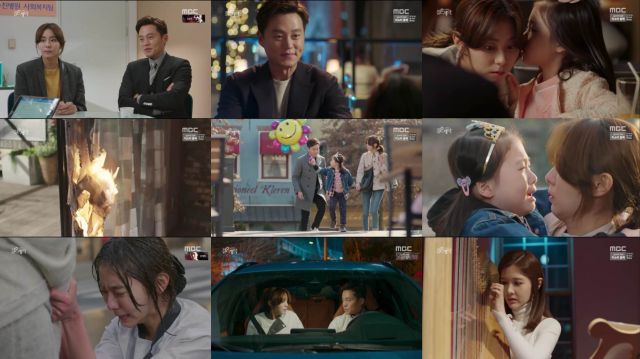 While Ji-hoon has done a diligent job of preparing every possible angle of his fake marriage story, ultimately, it's unsurprising to see that the most basic questions are the ones that easily trip him up. Ji-hoon struggles with the question of how to make a proper effort. What ultimately moves Ji-hoon to the right direction is unexpectedly realizing he has something in common with Eun-Seong. Both are fiercely protective of their mothers.

The inverse also ends up being true. Hye-soo and Mi-ran are both committed to their children. Mi-ran thinks a lot about how Ji-hoon, Mi-ran's only lasting achievement in this world, may well destroy his life to save hers. The lack of any real family aside from Ji-hoon is the clearest mental strain on Mi-ran. Ji-hoon's father Seong-gook (played by Kim Yong-gun) is the closest Mi-ran has otherwise come to love, and observe how even he is only ultimately is able to start worrying about Mi-ran in utilitarian ways, much as how with Ji-hoon there's always the constant pressing about how he needs to get married.

Compare all of this to Joo-yeon (played by Kim So-jin). As Hye-soo's closest friend, Joo-yeon is always asking eminently more sensible questions when it comes to Hye-soo's psychological well-being. As a friend Joo-yeon is kind, attentive, and even willing to be a little mean in order to make her point. These moments are often uncomfortable because writer Jeong Yoo-kyeong is drawing attention to the implausibilities inherent in the premise of "Marriage Contract", but more often than not the flaws are forgivable because we're right on the cusp of more uplifting material.

The way the characters in "Marriage Contract" have to struggle with each other is telling. Ji-hoon struggles with patience, even though he lacks any real responsibilities and in fact has plenty of time to do just about whatever he wants with his life. I like watching his scenes with Eun-seong because Ji-hoon is genuinely annoyed that Eun-seong doesn't cooperate automatically, and ultimately decides he'd rather accept the challenge than admit defeat.

The main possible issue in "Marriage Contract" to date is that while Ji-hoon has all these dramatic character flaws, so far Hye-soo just tries to struggle with bad things happening to her and accepting harsh attacks in turn. Her big scene this episode quite literally involves a big wailing mess of despondency in the midst of a rainstorm, because while the situation is less than ideal, for the moment, it's the only plan Hye-soo has. There's heart even in that kind of cliché, though, so I'm not minding just yet.