[HanCinema's Drama Review] "Marry Him If You Dare" Episode 1 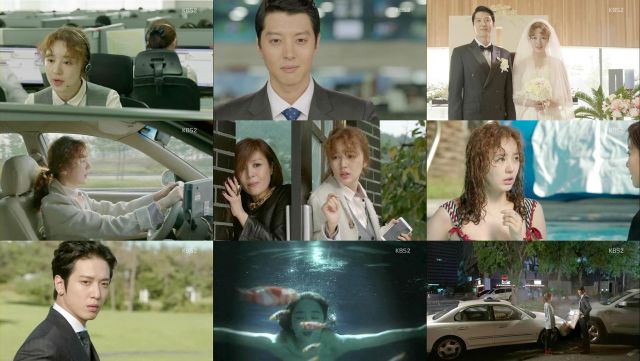 Time travel stories often have this frivolous air about them, that our heroes are using this amazing plot device to accomplish rather mundane feats. I don't hold it against the concept- time travel narratives would be pretty boring if every last one of them just boiled down to a plan to assassinate Hitler. "Marry Him If You Dare" makes the interesting narrative choice, though, of making us question the wisdom and discretion of the person messing around with history in the first place.

Even in the present day Mi-Rae (played by Yoon Eun-hye) isn't exactly the most sympathetic person. She's got that manic eccentric comedy heroine aire about her, and while this is definitely funny, the question immediately comes up as to just how pleasant a person she really is to be around. The bizarre relationship between her past and future selves only highlights this- Mi-Rae seems incapable of accurately understanding the situation around her, regardless of whether that circumstance is "my future self has come to change my life for reasons that she won't explain" or "I will change history by myself according to a really complicated plan I won't tell anyone and can be ruined by practically anything".

Right now the drama is still stuck in the mystery of what exactly the future Mi-Rae (played by Choi Myung-gil) is trying to change the future to, so its difficult to gauge the narrative direction. What I can state for certain right now is that this drama is quite funny- there's a clear absurdity that inhabits all of Mi-Rae's actions and motivations that shines through excellently with the blocking and editing. This is a very clean, well-designed drama technically.

It also has some of the most fabulous hair I've ever seen. Just look at that great fashion sense. Even when the action gets to be a little slow, I just think to myself how great the hair is. The younger Mi-Rae's frizzy hairdo is the obvious standout, managing to look fantastic even though fancy hairstyles are normally flat. But the the rest of the cast also has a slick shiny sheen that just makes me admire the skills of whoever this drama's stylist is.

The strongest compliment I can give to "Marry Him If You Dare" right now is that this is clearly a drama that wants to have fun and which, like its lead character, doesn't care how goofy it looks in the process. This episode ends with a confrontation that seems likely to ruin the future Mi-Rae's plans, but even without this dramatic context the inevitable sparring match alone looks to be a treat for the imagination.