[HanCinema's Drama Review] "Marry Him If You Dare" Episode 12 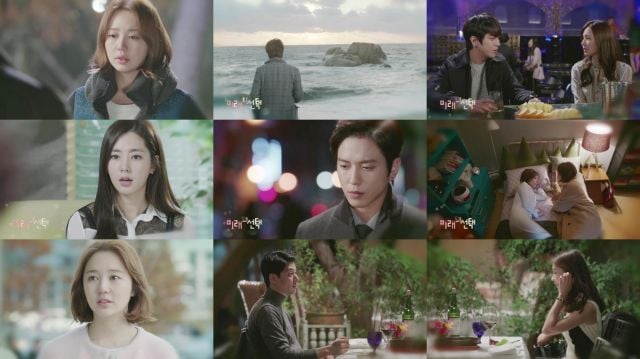 It's Christmastime in "Marry Him If You Dare", and this episode goes into all the emotions associated with the holiday. Exisential dread and despair at taking stock of relationships past and present and suddenly realizing that horrific flaws lurk just beyond the surface, and that they're never seen until it's too late. That's not very Christmas-y in the general sense of the term, but for anyone who's ever had that kind of nasty holiday this episode hits pretty close to home.

Future Mi-Rae finally explains in full detail exactly what happened with her and Kim Sin in the future. It's a fairly discouraging story and answers nearly every pressing question about the narrative. How she could clearly have positive feelings for Kim Sin yet still be so determined to undo the relationship. Why she won't tell present Mi-Rae the whole story. Why she's consistently so overwhelmed with emotion every time she sees her brother.

The toughest part of all this, though, is that the flaws she describes in the relationship make perfect sense with what we've seen of these characters so far. It's all well and good, in the immediate context of the romantic comedy, to think that things will work out fine in the end. But future Mi-Rae's story brings up several unresolved problems the relationship would cause for which no clear answer has yet been alluded to.

It's clear, for example, that her just telling present Mi-Rae and Kim Sin about what will happen isn't good enough, since the tragedy that finally ruins the relationship once and for all was the result of a single inattentive moment. By definition those aren't crises that can be predicted and averted since nobody can constantly be paying attention all the time. There's a lot of resentment bubbling here, but it's just sort of aimed in a scattershot direction at everybody.

The only apparent escape is future Mi-Rae's plan. Which actually takes Kim Sin's feelings into account a lot more than we had been led to believe up until this point. It's just taking into account the kinds of feelings he would never admit, that no one would admit, because it's the very antithesis of compelling romance. "Marry Him If You Dare" has left itself in a very difficult to resolve spot with this episode. Now that the long term future is an explicit consideration, getting any kind of happy ending is going to be a lot more difficult. How it could even be clearly accomplished (especially with Kim Sin) is especially unclear. All in all, an extremely well done episode.

"[HanCinema's Drama Review] "Marry Him If You Dare" Episode 12"
by HanCinema is licensed under a Creative Commons Attribution-Share Alike 3.0 Unported License.