[HanCinema's Drama Review] "Marry Him If You Dare" Episode 13 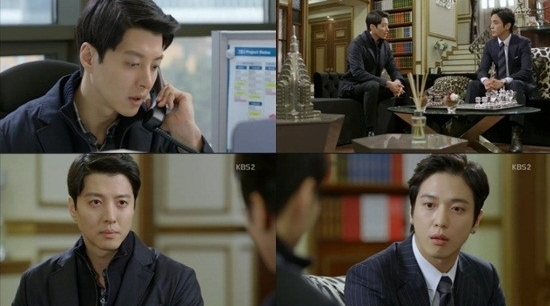 The drama hits a weird pace this time, as for the most part all the conflict has been resolved. Kim Sin has been thoroughly put off from Mi-Rae, and moves forward with his plans to avoid the rather nasty future that the older Mi-Rae warned him of. The other characters by contrast, have very little to do. There's another plot about the latest news-team related drama, but this storyline is fairly subdued and there's not much sense of a dramatic sense now that all the loveline stuff has apparently been resolved.

Apparently being the key word. The cast as a whole is rather lethargic here, which seems rather at odds with this being the future Mi-Rae's supposedly good outcome. There might be something to be said for enduring a little bit of discomfort in order to secure a better long-term future, but as far as I can tell the characters will just continue on in this state indefinitely. Essentially, the future is now.

Yoo-Kyeong, at least, is willing to challenge these perceptions, as in one scene she directly confronts future Mi-Rae about everything that's happened, and directly calls the older woman out on the morality of all this. The issue of selfishness in Mi-Rae's choices has come up before. It's only just now, for example, that she gets around to dealing with Joo-Hyeon's long-term medical issues. It's always been rather curious how she's prioritized the lovelines over all her other information which is much more unambiguously useful in the present day.

The story hits all the right points and the narrative moves around smoothly. However, this episode still suffers from a problem that pops up in this drama reasonably often- it's just not terribly exciting. Granted this time we at least have a pretty good excuse for it. The whole point is that no one is having much fun anymore. But just because something works in the context of the narrative doesn't necessarily make it very enjoyable to watch.

Still, there are a few decent enough plot twist surprises thrown into the mix that will hopefully change the drama's dynamic going into the final few episodes. Right now, it looks like both Mi-Raes will need to make a choice about what they're going to do about the future. Given how heavily layered the implications of that sentence are in the drama's Korean title, I'm pretty optimistic that whatever these outcomes may be, they'll be able to collate pretty well with the drama's overall themes.

"[HanCinema's Drama Review] "Marry Him If You Dare" Episode 13"
by HanCinema is licensed under a Creative Commons Attribution-Share Alike 3.0 Unported License.