[HanCinema's Drama Review] "Marry Him If You Dare" Episode 14 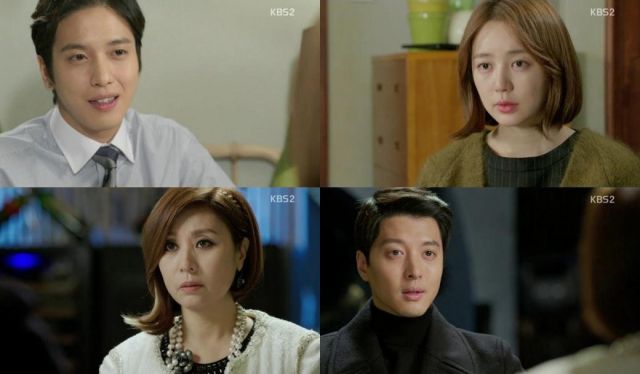 This episode makes a much more convincing argument that the drama really is all over, that everything has resolved for the better and it's just leftover feelings and nostalgia for the past that's slowing things down. Mi-Rae and Kim Sin make their final goodbyes, and the emotional pain is blunted by Kim Sin's insistence that the choice he's making is a good one that will be better for him in the long term. Especially since he's probably right.

Probably. I liked how the flashback of Kim Sin's time at the station starts out with him doing all that career stuff that's so important to him, then quickly merges to the career stuff that he was doing with Mi-Rae, then mostly just becomes about Mi-Rae exclusively. That's the rub of nostalgia for you- a person may know logically that a fulfilling career brings about the most consistent, least dangerous brand of happiness, but regardless, Kim Sin can't help but feel like he should want more.

Similarly, it's time for everyone to say goodbye to the future Mi-Rae. And while her influence in the present day has been consistently muddled, with all the final difficulties clearly sorted out, there's really no point for anyone to treat her with spite or dislike at this point. The various careers and lovelines of the cast will move on from the wacky events of the drama. And the future looks bright enough, so there's no point in dwelling on these past events.

All of this comes to a screeching halt when future Mi-Rae learns some shocking new information about the future she's just created. This changes her understanding of the situation so completely that...well, now what? What exactly is she supposed to do now? There doesn't seem to be any apparent plan that will solve the problem. Is future Mi-Rae just intending to meddle with the people in the present day indefinitely? Are we heading to an ending with way more speculative science fiction than what's come up this far?

The timing and tone of this week's episodes are a little weird, because for the most part these have been epilogues that have clearly wrapped up all the remaining plot threads. It's too late for another villain to pop up out of nowhere, and while the information future Mi-Rae has discovered is of obvious importance to her, it's fairly meaningless to any other character in the story. I honestly have no idea where the narrative is supposed to go from here- but I will admit, this episode definitely puts me in the mood for a surprise.

"[HanCinema's Drama Review] "Marry Him If You Dare" Episode 14"
by HanCinema is licensed under a Creative Commons Attribution-Share Alike 3.0 Unported License.