[HanCinema's Drama Review] "Marry Him If You Dare" Episode 2 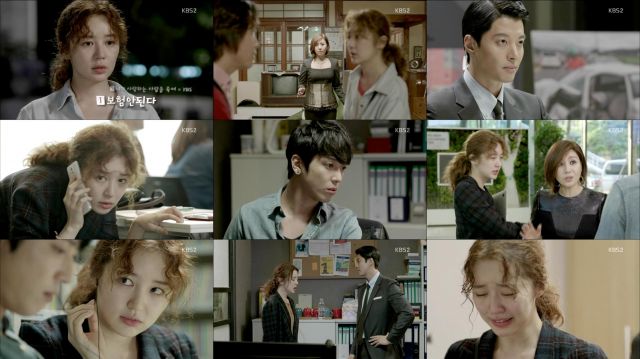 This episode features an extended look into the exciting world of TV broadcasting. Which, surprisingly enough, isn't really that interesting. The main charm from the first episode was in the general zaniness of the proceedings. That sense of imagination is largely missing here. Aside from a few basic points of motivation, all the focus here is on relatively mundane events that could have (and maybe did?) happen in the original timeline.

I won't be too hard on this episode, though, since it does set up a lot of important motivations. We get a glimpse as to what the future Mi-Rae's plan is, primarily in the way she meets and interacts with all these people in the past who are not her earlier self. Future Mi-Rae has been pretty cold and mean so far, so it's surprising to see her bloom into a full emotional state upon finding men in her life who the present Mi-Rae seems to regard with a fair amount of indifference.

Future Mi-Rae is a pretty clear mother figure for her present self right now, but the cracks in demeanor we see this episode only lend more credence to the possibility that her goals are inherently flawed. The argument she presents for the specific kind of change present Mi-Rae needs simply isn't a persuasive one. Future Mi-Rae insists her plan is the best one, and that may well be true. But just because she has enhanced credibility as the future self isn't enough to make the present Mi-Rae give up on her dreams.

Of course, the present Mi-Rae's dreams are also rather...questionable. She really is a complete rookie, and it's not completely clear how much progress is possible even assuming the future Mi-Rae's help, although romantically speaking present Mi-Rae appears to be moving with a heavy dose of cute meetings. There's a weird ambivalence in watching these events play out- Mi-Rae has some inkling that this is the time when destiny will be made, but the men in the story as yet are completely clueless, and so far react accordingly.

There's lot of possibility here- but for the moment it's only possibility. This episode spends so much time delving into the question of potential futures that there's not too much space left for the ongoing proceedings to be all that inspiring. If this were the middle of the series I'd consider these developments to be static- but given that we're just starting out and more revelations are almost certain to shake things up next episode, "Choice of the Future" is still worth waiting to see.