[HanCinema's Drama Review] "Marry Him If You Dare" Episode 3 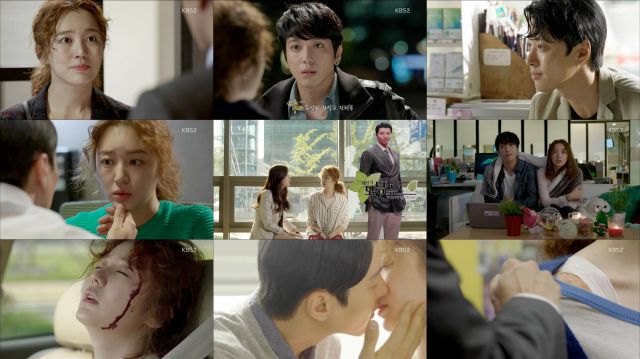 The merits of Kim Sin (played by Lee Dong-Geun) as a human being are on relatively dubious footing. He turns cranky at the slightest provocation and clearly enjoys starting fights- a part of his personality that's in bizarre conflict with his squeaky clean demeanor as a broadcaster, though it doesn't at all conflict with Kim Sin's hard-hitting passive-aggressive journalistic style. His swearing is a crude, but effective exemplar of this. Especially since this part of his attitude doesn't go away just because he has a moment of softness.

But this episode goes even farther in completing that circle by introducing Seo Yoo-Kyeong (played by Han Chae-ah), the missing link in future Mi-Rae's complicated love manipulation chart. And she's about as obnoxious. Imagine that woman in the office who flaunts her sexuality, not so much because it's her personality as it is an easy way to get a rise out of people, whether it be men or women.

There's an icy edge to this drama's presentation of Yoo-Kyeong that really makes me appreciate its direction. Far from being a male fantasy of a liberated woman that's all too common, Seo Yoo-Kyeong is just plain annoying. Even the men don't particularly like her attitude. This applies not just to Kim Sin but also Park Se-Joo (played Jung Yong-hwa). Up until now he's been the perfect gentlemanly nice guy. But Yoo-Kyeong actually manages to provoke him into cold sarcasm.

The way these character dynamics come together is excellent, and fits well with the drama's overall charm, as well as further deepening the mystery of what the future Mi-Rae's plan is. The design of her chart becomes all the more inexplicable, because in this episode it's implied that future Mi-Rae also wants Yoo-Kyeong to get a happy ending. Maybe. Like all good understated plotlines, "Marry Him If You Dare" is smart enough not to give us obvious answers too quickly.

The drama's also smart enough to throw a giant monkey wrench into our understanding of the time travel dynamics just in case the character motivation mystery was too subtle to fully capture the viewer's attention. If this episode's preview is anything to go by, the scheming is going to kick up another level as even more characters get manipulated in even more bizarre ways. "Marry Him If You Dare" may be slowing down on its use of gimmicky editing jokes, but it's looking like the deeper storyline might be even better the sense of humor on display in the opening episode.