[HanCinema's Drama Review] "Marry Him If You Dare" Episode 9 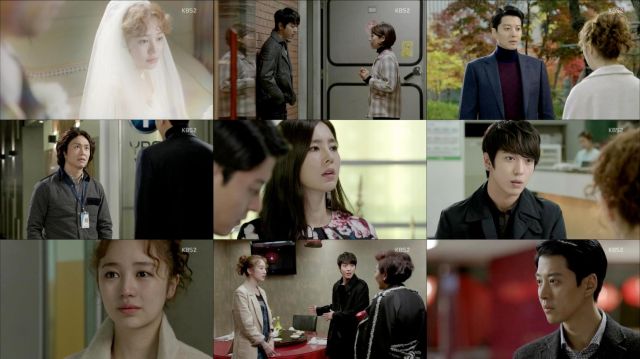 I find myself questioning the accuracy of "Marry Him If You Dare"'s portrayal of the broadcasting industry. I know that broadcasting companies produce a ridiculous amount of content, and that not every minute of it is going to be a part of a high-class production, but pettiness really should be avoided. This episode sees the creation and abrupt solving of a villainous subplot involving writing credits.

But since the drama is polite enough to quickly move on from this, so will I. The conflict described above ends up providing the catalyst through which future Mi-Rae's plan finally comes to fruition. She's finally found just the right circumstance of crisis, allies, and emotional manipulation to get the people close to the present Mi-Rae acting in such a way that present Mi-Rae finally buckles down and makes the proper decision.

Or does she? Interestingly, the new threat to future Mi-Rae's final success comes from a person who should theoretically be on her side- Yoo-Kyeong. There's an interesting scene here where Yoo-Kyeong runs into future Mi-Rae at an unexpected moment, and future Mi-Rae gloats- a decision which makes no sense in context since as far as Yoo-Kyeong knows, they're not actually fighting over anything. This leads to the series of event that makes up the cliffhanger.

It's a fairly appropriate turnabout. From the very beginning this drama has challenged the validity of future Mi-Rae's plan and it's only just now we're getting a good look at the context of that plan from a place aside from future Mi-Rae's own biased words. At first I questioned the ease with which Yoo-Kyeong was able to discover future Mi-Rae's secrets- then I realized, future Mi-Rae's top priority is almost certainly to keep her younger self in the dark, not worry about Yoo-Kyeong's reactions.

This is the main flaw in future Mi-Rae's manipulative operations, is that they only work to the extent she's able to get other people to go along with them without question. Future Mi-Rae is able to successfully frame her entire master plan as being a series of noble sacrifices people should make to help present Mi-Rae- it's actually really selfish if you think about it, since she's really just asking people to help her indirectly for no reason. But it works in context and I don't even hate her that much for it. Mind, this may just be a failure of the drama- while I like the way the story is constructed and it keeps me engaged, it's been lacking in particularly strong emotional elements. I hope Yoo-Kyeong's discovery leads to more serious, intense call-outs along these lines.

"[HanCinema's Drama Review] "Marry Him If You Dare" Episode 9"
by HanCinema is licensed under a Creative Commons Attribution-Share Alike 3.0 Unported License.