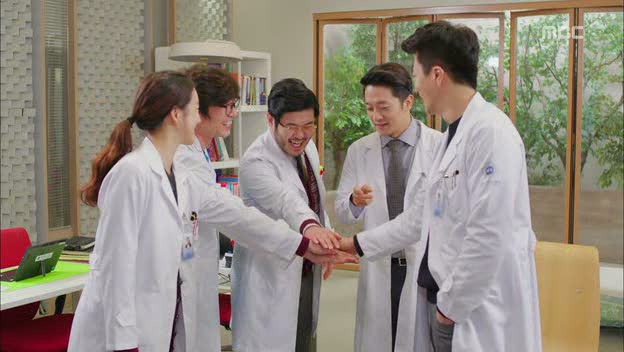 At long last, "Medical Top Team" has waded through its twenty episodes and reached a conclusion. It did not need twenty episodes to reach the all-too-happy ending, which was illogical albeit heartwarming.

The strongest part of the show was its medical aspect. The medicine was always clear with explanations given either in subtitles or verbally by the doctors. The surgical scenes weren't too gory and did manage to use human emotion rather than the procedure itself to fuel them. It's why ending the show in surgery was a smart move. It's what the show was about: a team gathering to put their brains together and save a life. It's what I wished for the rest of the show.

All the conclusions that "Medical Top Team" came to were what I was hoping for much earlier. Seung-jae realized that the team fell apart because he was selfish, single-minded and didn't allow the team to work as a team. He treated it like a dictatorship because of his desire to win the approval of his father. Only in the eleventh hour did he realize this, which seemed much too late for a whip-smart character like Seung-jae. Then, in that eleventh hour, the team comes together to re-establish itself as a cohesive, cooperative unit. It should've happened earlier so that they could take on daunting medical tasks and battle the political powers-that-be together. The internal struggle of the team would've taken on a different, much more interesting shape if that had happened.

In terms of the jagged character development, I found myself missing Tae-shin's playfulness and medical creativity in the latter part of the drama. I also wonder how he resolved his issues with being orphaned. They seemed to fizzle out rather that heal. I had hoped to see him slowly open up his wounded heart to Ah-jin, but he never did. Ah-jin was a stagnant character who did not do much growing and changing, but the biggest disappointment was Sung-woo's character who just shriveled up. He never confessed his feelings to Ah-jin. Then the show carted him off to Texas for a two-month internship at the end and never allowed him to resolve his issues with Ah-jin. He was conspicuously absent from the ending scene, which may have had to do with idol actor Choi Minho's schedule.

Onto the assistant director who went from the resident bad guy who a woman who suddenly regrets being evil for the bulk of the drama. It could be blamed on the dementia, but the change was stark and startling in terms of character development. What was more surprising than the change in her was how quick everyone was to accept her apologies without any grudges. Not only that, but the show turned her single-minded ambition to create a hospital that will cater to VIP clients and rake in the bucks into a humanitarian lifelong dream, which it most definitely was not at the start.

The other villain of the later part of the show, the managing director, was very conspicuously absent in the last episode. How did the assistant director manage to get around his clever schemes and make everything right with the Top Team politically? He seemed to magically disappear, which is the general failing of the drama. There was no logical progression to the plot and character development.

This drama was strongest at the beginning when the characters has strong personalities, clear trajectories and lots of room for growth. It remained a beautifully shot show with interesting angles, stark exposures and realistic surgical scenes. The cast was strong and they deserved better material to work with.