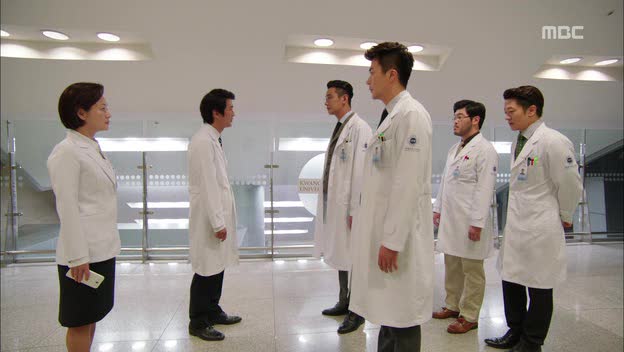 This is a medical drama done right. It doesn't just throw out high-falutin' medical terms and insert tense situations just to force viewer interest. No, it manages to develop characters who feel real, infuse political tensions, and create life-and-death stakes in a world that is engaging and believable.

A high-profile, high-risk patient came in last episode. He is the son of Se Kyung Group, a powerful company whose investment in Kwang Hye University Hospitall and its associated businesses depends on the quality of treatment. However, the mother wants the son treated in America despite the risks of travel. The stakes are extremely high. The patient is in precarious condition. Se Kyung Group's investment is unsure. The position of Seung-jae's "Medical Top Team" is unsecured. If Kwang Hye's staff performs the surgery and succeeds, the rewards are manifold. If the surgery fails, the fallout could prove disastrous for lives, careers and businesses alike.

Those are real stakes. All the people involved have various motivations: saving lives, proving themselves, securing investments. It's intense and wonderfully true to life. The problem is a huge grey area with no right or wrong answer. However, Seung-jae has to prove his Top Team is worthy of its name. His aunt, the assistant director, wants to use the Top Team to create a high profile-client wing that will significantly increase revenue.

The complexity of it all is wonderful. Almost lost in the fray is Joo-young, Seung-jae's choice for the thoracic representative in Top Team, but she doesn't want to be seen as riding on his coat-tails to ensure her career. She's fighting her pride and politics. But she's also fighting for her patient's life: the VIP son who is refusing treatment. She and the other doctors know he needs surgery as soon as possible, but convincing the parents won't be easy. On top of the complex situation, more medical issues arise, and Seung-jae secretly convenes Top Team to deal with them. In the end, Seung-jae convinces the mother to have the surgery using Tae-shin's American surgical experience. Reluctant Joo-young joins the surgery and the high-risk VIP son of the investors is put under the knife.

At the end of the episode, a problem arises at the start of the surgery. It's a moment pregnant with tension. All eyes are on the surgical team. John Park's "Light" plays as the surgery unfolds and the director feeds us beautiful shots of the characters physically and mentally prepping and the OR. I really eat this stuff up. The story is wonderfully complex. I can invest in the characters. I only hope the show stays this strong.

As for the "Medical Top Team" itself, we are introduced to it's members. Tae-shin, Seung-jae and the adorably dorky anesthesiologist Dr. Jo are one half of the team. The other half is made up of the hospital's spy, Bae Sang-gyu (played by Clazziquai's Alex), and Jung Hoon-min (played by Kim Ki-bang). It's wonderful to see Ki-bang get a larger role like this. I've always loved in him in his smaller roles and he is hysterical as the uptight, well-spoken, Sang-gyu hating neurologist. Eventually, Joo-young will join the team, but she's probably going to hold out another episode or two.

There are also lesser plot threads going on like Sung-woo's love for the oblivious boy-crazy Ah-jin and Tae-shin's adorable relationship with his young patient, Ba-wi. Even though small, these stories still feel realistic. They're not just there for show. They add to the panorama of Kwang Hye University Hospital and make me feel like I'm taking a peek into how the hospital and it's people work and function.