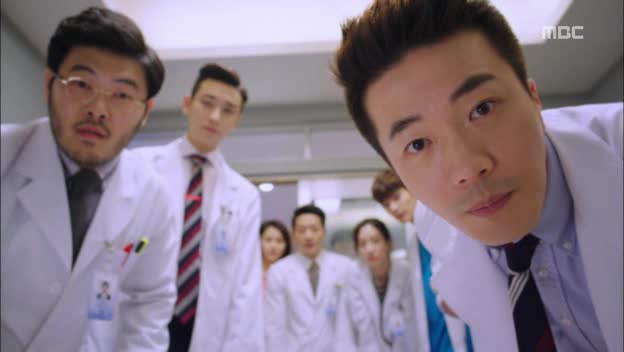 While I really appreciated the intense drama of the first four episodes with dangerous operations and sick patients and hospital politics, it is all starting to be too much. Dramatics are good and well, but only if they are interspersed with other elements like episode three did so nicely. There are a few moments of quiet introspection, but they weren't powerful enough to balance out the intensity of the medical scenes. What I initially liked about "Medical Top Team" was its ability to blend the medical with character development. There was much less character development in this episode, which meant there was a lot less substance.

There are two major events in episode five. The first is the continuation of the VIP chaebol son who barely pulls through his heart stopping at the end of the last episode. Tae-shin doesn't agree with the "Medical Top Team"'s treatment plan and decides on his own to treat the VIP son with a dangerous drug. Seung-jae, who has just been told by his chairman father that he isn't considered a son, is furious that Tae-shin won't follow orders. He desperately needs to prove his worth to his cruel father. To make matters worse for Seung-jae, Tae-shin ropes Joo-young into helping him. It turns out Tae-shin's prescription was the correct one and the VIP son awakens. But the damage to Seung-jae and the hospital has been done. The VIP son's family has pulled their investment and will send start an investigation of the doctors if the son dies.

This entire scenario is wonderfully juicy and rife with potential. Episodes one through four used it well. This episode neglected to put more focus on Seung-jae. Yes, the medical aspect is interesting, but watching Seung-jae struggle to promote "Medical Top Team", fight his father, impress the girl and try to control the wayward Tae-shin is much more fascinating. I wanted more than just a few moments of focus on Seung-jae's anguished face. I wanted to see the little things: maybe slam a coffee cup down on a table, or, snap at a passing nurse. The scenes with Ah-jin and Sung-woo are the best at capturing the little moments, the mundane activity, the "in-between" stuff, if you will. Not just the chance encounters in the hallways that do more for plot-building than character-building.

The second major event is that Ba-wi crashes and is in dire need of an immediate lung transplant. Tae-shin considers Ba-wi to be family and throughout the episode, he spends a lot of time adorably bonding with her. Because there are no brain-dead child patients, the alternative solution for Ba-wi's situation is to have a live donor. It's as dangerous as it sounds. Seung-jae and the rest of the Top Team are hesitant to perform it, but Chief Jang wants to try. If the Top Team succeeds, then they will make a name for themselves and be able to bring in funding and be the core doctors for the Royal Medical Center for VIP patients that the assistant director wants to start.

Seung-jae is further stressed by this situation because he cares for patients like Ba-wi, but he also has socio-political reasons to consider. Tae-shin is so involved, that he can only think of saving Ba-wi. Aren't medical practitioners close to patients supposed to be excluded from treatment? In any case, like with medicating the VIP son without consent of his team, Tae-shin goes to the assistant director for help and with tears in his eyes, begs her to permit the live-donor lung transplant. The plot move is fantastic because it sets up for some juicy character interactions if the writer chooses to use it. Tae-shin has been flying solo even though he is now part of a team. He cajoles Joo-young to join him so it wasn't really teamwork. As a doctor and a man he needs to learn to lean on people and trust them.

But because Tae-shin went to the assistant director for help, he will probably be considered a rogue agent by Seung-jae. Seung-jae knew that Tae-shin was not someone to be controlled when he hired him, but I think the realization hits him hard this episode. I just want to see more of the "hitting" on screen. I want more little moments to balance out the epic nature of the medical crises.