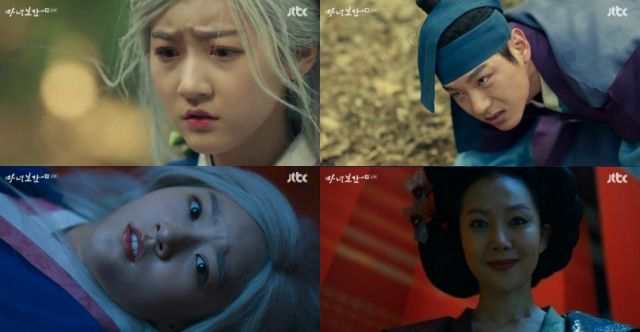 Now that team Yeon-hee and team Poong-yeon have finally met and teamed up they can...not really do anything more complicated than what they were already doing, because their goals are still as poorly defined as ever. Ugh. I really don't like harping on these motivation issues again and again, but it really messes up the emotional impact of scenes like this when there's no immediate compelling reason for Yeon-hee and Poong-yeon to meet up again.

Compared to the usual, though, quite a bit of dynamic action happens this episode in the name of idiotic plans. Hong-joo's failed gambit is the most interesting because it's clear from Yum Jung-ah's expression that the sorceress herself realizes this was a stupid idea halfway through and struggles with trying to figure out how to walk away from the situation without looking like a complete idiot.

Elsewhere, Heo-ok's latest scheme to frame Jun for the serial murders actually ends up working, although since this is an accidental success Heo-ok predictably fares poorly in the aftermath. Hyeon-seo also comes up with a bad idea to fulfill a Yeon-hee related prophecy, although it's possible the outcome was intentional. It's hard to tell when characters are able to stand back up right away from injuries that should have been crippling and proceed to make quick getaways even when carrying a ridiculous amount of extra weight.

That's my main issue with a lot of the story in "Mirror of the Witch"- it works only in the sense of getting characters from location A to location B. Logistically many of the scenes are completely nonsensical or even outright pointless in context. Poong-yeon's main helpful contribution this episode involves a trip to the jewelry market. Which I didn't hate that much, actually, since it finally gives a clear hint as to what role his sidekick Sol-gae (played by Moon Ga-young) is supposed to play in the larger story.

Now, granted, simply by process of elimination an astute viewer has probably already guessed what Sol-gae's role is, the usual problem being us having to wait for that plot point to be more clearly explained. But perhaps I'm being a little harsh. By the time we get to the cliffhanger one lead character is finally face-to-face with the main villain of "Mirror of the Witch", and this problem is simply too big to be solved in the usual flippant fashion. I do like "Mirror of the Witch" when it gets genuinely intense enough that the plot is a genuine afterthought.

"[HanCinema's Drama Review] "Mirror of the Witch" Episode 10"
by HanCinema is licensed under a Creative Commons Attribution-Share Alike 3.0 Unported License.